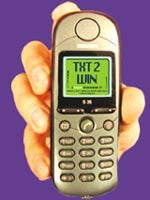 The ever-increasing use of SMS allows marketers to send the right messages at the right time, to the right customer via a channel that accompanies them wherever they go. Indeed, the growing number of SMS campaigns – from the award-winning Cadbury’s promotion, developed by integrated agency Triangle, to Debenhams’ attempt to attract shoppers to its January sales – show that marketers are embracing this channel with great enthusiasm, and the results look promising. Following the Cadbury’s campaign, Cadbury Schweppes chief executive John Sutherland was reported as having told an annual results meeting that texting had done much to stem the decline in chocolate sales.

Furthermore, although it might initially appear that SMS is best aimed at the youth market, it appears that it can be used to target any age group. Promotional risk company PIMS-SCA business development director of managers Rick Brownlow says: “Given that SMS use among 15to 24-year-olds is 86 per cent, and 87 per cent among 25to 34-year-olds, this is most definitely a ‘youth marketing’ tool for brands. However, SMS use is growing in other markets, so there is no reason why in the future, a supermarket couldn’t run a promotional SMS campaign targeting older users when they are in the vicinity.”

Independent figures provided by Carat on SMS campaigns devised and executed by wireless media channel Nightfly, provide the most compelling reason of all. Examining industry average response rates for delivery of a range of direct marketing activities shows that SMS is an extremely cost-effective promotional tool. Carat calculated that the cost per response for Nightfly SMS campaigns was £1.42, compared with £2.50 for a classified ad in local newspapers; £2.67 for flyer distribution; £6 for advertising on local radio; £20 for a local door drop and a whopping £24.51 per response for a local paper inset with a circulation of 95,000.

But can this figure be blighted by hidden costs? Brownlow suggests that this is possible. He says: “The most important cost issue for many SMS promotions is how many responses will be received. Given that the SMS medium is relatively new as a promotional tool this is a valid concern. In addition, another less apparent cost issue is the price to the promoter of an entrant replying to a promotion. This can be costly if there are many incorrect entries, as the cost per SMS reply can be as much as 5p.”

Dan Radice, managing director of Nightfly, which targeted 33,000 women to promote Debenham’s New Year sales, takes a different view. He says: “The only way that costs can rise unexpectedly is when there is a campaign involving consumer interaction, for instance, a text and win campaign. If more consumers than expected reply, and the costs are based on the number of incoming messages, the total campaign costs can be higher than expected. Essentially this cost is not a hidden one – it is simply a result of unexpected consumer interest in a campaign, which can never be a bad thing.”

So is there a way that marketers can protect themselves from escalating costs? Brownlow says: “Promoters can use either Over Redemption cover, which insures against too many responses, or a Fixed Fee contract which covers all costs pertaining to the promotion.”

In addition to taking such cover, Radice suggests writing a stop clause into any contract.

Andrew Jones, managing director of mobile marketing agency Aerodeon, also suggests using “neutral pricing” whereby, “the mobile operators use the profit they make on customers sending in messages to cover the cost of the reply message, thereby removing the messaging cost/risk for the brand.”

Peter Norman, co-founder and commercial director of Wireless Information Network (WIN) – the UK’s largest supplier of third-party wireless services – believes that SMS campaigns have additional advantages in terms of database building. He says: “Advertising a competition is the expensive part, so this cost does not change whatever the medium. The change comes in managing the incoming entries, especially with large newspaper competitions where you can be dealing with up to 17 sacks of mail. Whereas with text and win, the entries go straight into a database, so the costs are less.”

But there is a downside

Ironically, however, it appears that the very elements that makes SMS attractive – cost effectiveness, directness, and immediacy – could be its downfall. As more marketers use SMS in their campaigns, there is the danger that the channel will become flooded. And any initial receptiveness shown by consumers to receiving text messages will be overtaken by an irritation at what they perceive as a violation of a means of communication that they hold as being intimate.

Jed Murphy, group account director for global relationship marketing agency Carlson Digital, part of the Carlson Marketing Group, is concerned about intrusiveness. He says: “This is especially true of unsolicited communications. In other words, those not related to any kind of transaction, but related to a pure marketing message. A person’s phone is – for the time being – still seen as a bastion of privacy. Unlike e-mail, which was once held in the same esteem, any contact via a phone that is unsolicited still incites a response from the recipient. If they don’t know you they will want to know why you are contacting them via such a personal medium.”

The key element in ensuring that this issue does not assume the proportions of a threat is that of permission, and here Radice points out that the mechanics for sourcing the market play a crucial role in the success of any campaign. The two most popular sources appear to be “text and win” competitions, promoted via a number of relevant channels where the market is self-selecting, versus the use of a proprietary database. Alternatively, markets can be developed independently and then segmented for targeting.

To this end, Nightfly has recruited users face-to-face in public spaces, including pubs and clubs, and struck partner deals with affiliates. The result is a database of 1.3 million users who have actively “opted in” to receiving messages via this channel.

But how secure are SMS campaigns? Brownlow says: “Obviously no system is infallible, so it is always possible for a hacker to infiltrate a promotion, but it is complicated and they will need specialist, expensive equipment. Digital responses are always tracked by the SMS supplier, who is adept at following the redemption patterns, so should multiple applications be received from a dubious source, they will bring it to the promoter’s attention. This is exactly the same way that a handling house would deal with a traditional free mail in. An extra security mechanism that was applied for the Cadbury’s SMS promotion was the rule that consumers needed to send in their wrappers for validation for the higher value prizes.”

Some may argue, however, that the real untapped potential for SMS is the role that it can play in customer relationship marketing (CRM). Norman cites a number of clients who use the medium in this way. He says: “The AA texts its members when they break down to let them know where the AA man is. It reassures members, cuts down on people ringing back into the call centres and is the kind of added value that people expect from the AA. Cahoot texts its customers to let them know when they are about to go over their overdraft limit, and Blue Arrow texts its temps when vacancies become available in order to turn jobs around faster.”

With technological developments meaning that future SMS campaigns could involve the use of graphics, music, and even video, it is clear that this is a channel with enormous potential. But for SMS to retain its overall value, it appears even more important that it should be used for campaigns that are built on the twin pillars of permission and added value. If these issues are ignored marketers may find that, when the novelty of SMS promotions passes and receiving one too many unsolicited messages kills goodwill, consumers may simply turn off and drop out.

Things are really starting to look up for England. Beckham’s foot is on the mend, Sven has managed to ditch the hanger-on (Gary Neville) and the team is primed and ready. But all these things are completely overshadowed by the Subbuteo World Cup. Up and down the country, people are going over their tactics. Short […]

London Underground is to roll out its direct mail magazine tube after a successful trial. It is looking for sponsorship partners and advertising. The first issue of the A5 magazine went out in April to 10,000 people who bought Travelcards online at Ticket-on-line.co.uk. The first issue did not carry any ads. The revamped tube will […]

Golden Wonder’s Nik Naks brand is to sponsor the UK premiere of The Osbournes on MTV. The ten-part fly-on-the-wall documentary, which follows the bizarre antics of UK rock star Ozzy Osbourne and his family at their US home, was due to air on Sunday at 9pm. But it is understood that the launch date for […]