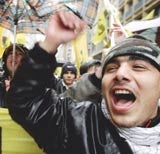 Tony Blair has pulled off one of the fastest public relations reversals in history, going from pariah to messiah in just six weeks. According to a MORI poll at the end of February, only 24 per cent of the public supported an attack on Iraq without UN backing and proof that the Iraqis had weapons of mass destruction. Last week, a Populus poll for The Times revealed that 64 per cent of the electorate think that “taking military action” was the right, rather than the wrong, thing to do.

Clearly, nothing succeeds like success. Though the great British public is notoriously fickle when it comes to adopting ideological positions, this is still an astounding turnaround.

So, either Blair truly is the messiah and has performed a miracle on a par with the loaves and fishes, or the collapse in opposition can be attributed to the fact that anti-war feeling was not as deep-rooted as was at first believed. One factor that can be discounted for the turnaround is the public relations abilities of the coalition.

Manufacturing public opinion in favour of war is as old as war itself. In the last century, the British made up stories about German troops bayoneting women and babies in Belgium to justify sending the British Expeditionary Force at the start of the First World War. In the Second World War, Hitler used supposed attacks on Germans living in the Polish Corridor to precipitate the invasion of Poland.

President Lyndon Johnson got Congress to approve a war because of a supposed incident at the Gulf of Tonkin. The US government invented a torpedo attack by North Vietnamese forces on US destroyers in the Gulf of Tonkin. The Washington Post and New York Times faithfully reported the incident. Congress authorised the president “to take all necessary measures to repel any armed attack against the forces of the United States and to prevent further aggression.”

And, in the run-up to the last Gulf War, PR company Hill &amp; Knowlton managed to get a UN resolution by making up an atrocity. They got the daughter of the Kuwaiti ambassador to the US to say she had seen babies being thrown from incubators by Iraqis. It was only after thousands of Iraqis had been killed in the war that it emerged that the story was a fabrication.

However, the real problem this time for the Anglo-American alliance was not public opinion at home but their inability to control global and, particularly, Arab opinion. The proliferation of global media and the growth of anti-American Arab media meant that the Iraq war marked the end of the spin cycle.

In previous wars, there was no alternative media to broadcast images instantaneously around the world, contradicting the US version of events. Every time the US and British governments tried to get a UN resolution, quotes from the weapons inspectors emerged, contradicting them. During the war, Al Jazeera and Abu Dhabi TV, as well as Western media, have had direct access to events. Political and military control of the agenda was weakened, drawing official complaints of “negative reporting”.

When the Americans and British tried to force the agenda with the famous dossiers, it did not take long to disprove their authenticity.

The reason is that there is far too much media now – the ability to control its output has been seriously curtailed. It is one of the ironies of globalisation that access to the media has not been restricted in the way that the Anglo-American coalition would have liked.

In the Iraq war, the images favoured by the Anglo-American forces were jubilant crowds, toppling statues and Saving Private Lynch. The images were mixed up, however, with Arab and Western TV images of limbless children, trigger-happy Americans shooting innocent civilians and appalling scenes of looting.

The most significant development in the Middle East has been the influence of Arab channels such as Al Jazeera, Abu Dhabi TV and even the Lebanese guerrilla group Hizbollah. It is ironic that the fundamentalist Hizbollah, opposed to using Western technology, now has its own TV channel, but this is the state of modern ideological warfare. The fact that Al Jazeera reporters were attacked by US forces indicates the frustration the Americans felt at not winning the media war. Even the state media in pro-US Qatar voiced strong opposition to the Americans.

It was the growth of the anti-American Arab media that prompted the US government to appoint former Ogilvy &amp; Mather chief Charlotte Beers, before September 11, to promote US values in the Middle East. She failed.

British attempts to win hearts and minds have not been not much better.

The British provided the comedy highlight of the war when “Two Rivers Radio” the Haw-Haw station set up by the British Army began broadcasting the Bee Gees’ How Deep Is Your Love? to the local Shiite population. Though the DJ may have misread the instructions on the playlist – “Play some shiite music” – there is madness in their method. The British and the Americans solemnly believe that the way to win hearts and minds is to restore normality (or “narmalcy” as the Americans call it) through mind-numbing music and entertainment.

The only ways the US can undermine the growth of Arab media are by co-opting them with ad dollars – implausible given the popularity of US brands in the Middle East – or by being seen to tackle the root cause of Arab hostility to the US: its support for Israeli aggression in the occupied territories. That is not a communications problem but a political one.