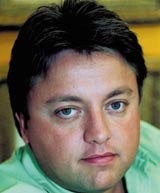 Advertising agency Lowe is preparing for a major overhaul of its management structure with chief executive Matthew Bull tipped to be promoted to a global position within the Interpublic Group.

Industry speculation suggests that Bull will have a more creative role within the network. In addition, former Grey London chief executive Garry Lace has been linked to the agency, possibly, to replace Bull and head the London office.

Lace, who has been without a job since his rapid departure from Grey last year (MW March 18, 2004), was unavailable for comment as Marketing Week went to press. Bull claims that there is no truth to the rumours.

Since Bull’s arrival at the agency in July 2003, the agency has lost a series of accounts including the &£350m HSBC global business, Unilever’s &£8m pan-European Surf and &£25m Flora margarine accounts, and the &£40m Braun account. Bull has also seen a raft of senior management leave the agency in that time, notably creative director Damon Collins and managing director Jeremy Bowles.

Last summer, the agency moved its headquarters from the US back to London, a move that was swiftly followed by the exit of Lowe Worldwide chief executive Jerry Judge.

ICI Paints, maker of the Dulux paints range, has appointed Philips Electronics director-general Richards Stukes as its first managing director to bring together its professional and consumer marketing divisions. Kerris Bright, who heads Dulux’s retail marketing as category and brand director, and Alison Kukla, marketing director for the professional paints division, will both report to […]

If marketed properly, a scientific study claiming that churchgoers outlive non-believers could see the pews packed to the rafters