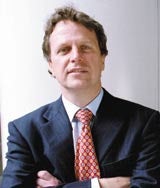 Barclays Bank is reshuffling its marketing department following the announcement that senior marketer George Bothwell will leave later this year.

Bothwell is centres of excellence director, a post that was created for him in January. He oversaw all advertising, market research and marketing support, and was responsible for the second “Fluent in Finance” campaign, featuring Samuel L Jackson, which was created by Bartle Bogle Hegarty.

Bothwell was previously business banking marketing director. Barclays says his two-year contract has come to an end and he is returning to his native Canada to be with his family.

Tim Kiy fills the post of marketing operations director, vacant since Andrew Gillespie was promoted to retail marketing director last December in a previous marketing reshuffle. Peter Duffy is appointed to the new post of marketing development director. Both are internal appointments.

The company has decided to let each division pursue its own marketing strategy rather than push the BPC umbrella brand. BPC marketing director Gordon Rankin is now being found another role within the group.