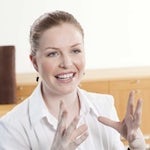 The ad will support its Sensodyne Multi-Action range with “Iso-active technology”.

The 30-second, testimonial style ad features “Kate” who discusses about how Sensodyne iso-active toothpaste can help look after sensitive teeth.

The TV ad, created by Grey, breaks at the end of February and will run until the end of March.

In January, Sensodyne appointed former Lowe executive Tom Nester-Smith as director of global communications to be responsible for the brand’s communications in 80 countries including the UK and the US and emerging markets such as China and India, where the brand will launch later this year.