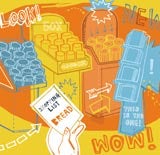 Retailers are no longer content to give brand owners – and their marketing and design agencies – a free hand with their point-of-purchase material. In a recent survey of top retailers, conducted on behalf of PoP design specialist Bezier, 69 per cent of the store groups that responded said their PoP was now managed centrally. The last time the survey was conducted, in 2000, the figure was 55 per cent.

There are a number of reasons retailers want to exert greater control over PoP material in store, according to Bezier managing director Gary Knight. One is that unrestricted deployment of PoP displays and advertising makes stores look untidy, and can confuse consumers and put them off their purchasing stride. Many stores have now instituted strict guidelines to avoid such visual clutter problems.

Our shop, our branding

Asda head of in-store communications Sarah Fothergill says: “I always tell companies that for us the Asda brand is the biggest brand in our stores. We’re brand managers too.” Asda has strict guidelines on PoP materials, and expects brands and agencies to adhere to them. “If we let every single brand do what it wants, we would look like a brand store, not an Asda,” she comments.

The majority of PoP material deployed in Asda stores is created in house, adds Fothergill. “Brands must go through our creative agency and have their material printed by our printers.”

Some brands nonetheless manage to sneak in their own PoP, she admits: “Some of the biggest brands still produce their own PoP material and put it in stores illegally. We are deciding how to deal with that issue. It may involve a charge and the removal of the offending material.”

Another major retailer with strict policies is Comet. Comet marketing director Bob Darke observes: “We work with brand owners to translate their PoP into Comet house style. It’s a collaborative effort, and we are always aware of the challenge of balancing commercial expediency with Comet brand integrity.” Darke also admits that Comet’s own buyers sometimes take the side of the brand owners – “the commercial teams will want to do what the manufacturers want to do” – but as he says, “they are our rules. We write the rules and we can change them if we want.”

Playing by the rules

Comet only allows two brands – Sky and Dyson – to design their own PoP material. “But we retain the right of final approval, and they still have to adhere to Comet guidelines in terms of fonts and size,” says Darke.

Clutter is not just a visual problem, but a physical one as well. Many stores have a “clear floor” policy, which can significantly restrict PoP designers in terms of creating new and exciting display systems.

Another reason for the centralisation of PoP control is money. Research suggests that roughly three-quarters of buying decisions are made in store, at the point of purchase. Yet only about five per cent of marketing spend goes on in-store advertising and promotions. Retailers have become aware that they own a very valuable media space, which could generate significant income if handled correctly. In the US, Wal-Mart operates what some experts claim is the fourth largest television network in the country, with thin-screen TVs in the aisles running ads targeting busy shoppers. Knight observes: “Retailers are certainly seeing PoP as a potential source of revenue.”

Not everyone in the PoP industry is convinced that retailers are as committed to centralised control as they say they are. Martin Kingdon, director general of industry body POPAI, says: “A significant number of major retailers have announced policies involving centralised control of PoP, and it’s a good indication that they are becoming more serious about advertising and marketing in store. But while two-thirds of retailers may say they have guidelines, I would question whether they are actually applied across the board. Take companies such as Asda and Tesco: they might say they have ‘clear floor’ policies, but if you visit certain stores, you’ll find that that rule isn’t necessarily applied everywhere.”

Obviously, major multiple retailers – particularly the big grocery chains – have a bigger problem with unrestrained PoP than certain other retailers might have, because they have to deal with thousands of product lines and packaging formats from hundreds of suppliers.

But even retailers who sell just one kind of product have woken up to the advantages of controlling PoP in their outlets. Ben Hurd, marketing planner for product at Waterstone’s, which has a policy that all PoP material deployed in its branches should be produced in house, says: “We work closely with all our suppliers and their design agencies to ensure that PoP material conforms to our visual guidelines. It’s very important that we maintain a consistent brand identity throughout our shops.”

A spokeswoman for Halfords, the car and bike specialist retailer, says: “All PoP material that appears in Halfords stores is designed and created in house to ensure a high level of brand consistency and quality. We work in close partnership with all our suppliers, but because of the diversity and breadth of our range, we maintain full control of this process.”

Paul Clarke, marketing manager at Line Packaging &amp; Display, a manufacturer and designer of PoP material, says greater retailer involvement in deciding what PoP material can go in store is a good thing for the PoP industry. He says: “As an industry, we are guilty of over-reliance on the single, generic floor-standing PoP unit. Retailers have told us how frustrating this one-size-fits-all approach can be, as it gives no consideration to factors such as stock capacity or individual retailers’ store environments. Retailers say that communication with suppliers is often poor, and products are designed for retailers to use, without considering their requirements in the process.”

Clarke is enthusiastic about the benefits of involving retailers in PoP design right from the start. “We’ve had meetings involving the merchandising team, buyers and brand to ensure objectives are met, in terms of both sales priorities and practicality. As the supplier, we often attend in-store meetings with retailers, taking along samples of our products to test and to determine shortcomings so we can make necessary revisions.”

Clarke adds that failing to involve retailers in the design of PoP is one major reason for retailer non-compliance – or, put more simply, why so much PoP “ends up in the skip, wasting opportunities for everyone”.

Put the shackles back on

Caroline Wilde, managing director of PoP company RMP, argues: “It’s easy to let creativity run away with you when designing PoP. For retailers, space equals sales, so to be effective it’s essential to think through any potential barriers to creating an effective display.”

She continues: “What can work well in a large out-of-town store, with plenty of space, can be a disaster in a small neighbourhood store, short on space and short on staff. We would always recommend that staff are asked to do the minimum of assembly and that clear instructions are thought through on siting for various store formats, well in advance. Designers should take the time to visit potential outlets and understand issues such as barriers to customer flow and practical siting.”

Tricia Weener, marketing director of marketing agency Intelligent Marketing, says one of the biggest problems that bedevils the relationship between retailers and PoP suppliers is practicality and ease of implementation. “Too many agencies develop generic ‘fit all’ kits, an approach which just doesn’t work. The other key issue for retailers is the ability of store staff to merchandise – they aren’t experts in this area and have varying levels of experience and ability. As a result, some put absolutely everything up, resulting in a cluttered look, while others implement next to nothing, thus reducing the overall effectiveness of the promotion.”

Weener argues that PoP designers must include detailed merchandising plans and guidelines for implementation to ensure maximum impact from the materials supplied. For example, for German retail client Tchibo, Intelligent Marketing sends detailed staff briefing notes with all promotional materials.

Tony Walton, managing director of agency Brand Design, says: “Responsible PoP designers and manufacturers make sure store staff get all the help they need in implementing PoP materials. This can take the form of a simple instruction sheet or a friendly voice on the end of a phone. Third-party experts, who will respect retailers’ shop floor and customers, are best placed to install the really complex initiatives. The easier it is to put materials in place, the more likely it is that stores will build the display as the designer intended, and see the full benefit of the campaign.”

While brands and agencies know plenty about boosting their own sales, and are brimming with creative PoP ideas, the retailers themselves are the real experts when it comes to the in-store environment. Their strict PoP guidelines might seem onerous at times, but their advice is worth heeding – and they, too, want to sell more of your product.