The ad was styled in a news bulletin format and featured a “report” on a light aircraft making an emergency landing, animals escaping from the zoo and chaos in New York, all caused by people using Lynx Attract.

The “epidemic” in the ad caused animals and people to remove their clothes and rush towards the opposite sex, a news reader character claimed.

The newsreader ended the report by saying “The EU are warning men and women to stay in side, lock your doors. Avoid all contact with the opposite sex and do not buy new Lynx Attract”.

Viewers complained about the ad on three separate accounts.

Some viewers claimed the spot was not recognisable as an ad by giving the impression it was a real news flash. Others complained the ad was offensive and unsuitable to be broadcast at a time when children might be watching due to its  “sexual content”, which included kissing and a gorilla holding a bra on top of a bus with a “69 BERLIN” display.

Separately, viewers also complained the ad was offensive because it made light of serious issues including aeroplane crashes and epidemics.

In response, Unilever said it used a “fantastical and humorous tone” interspersed with regular references to Lynx attract made it immediately obvious to viewers that it was an ad and not a real news bulletin.

The FMCG company added that audiences have come to expect and are comfortable with the type of “playful, sexy, tongue-in-cheek” tone it takes with Lynx advertising and “went no further” than previous campaigns that featured sexual but light-hearted treatments.

Clearcast gave the ad a post 7.30pm rating but Unilever also instructed broadcasters only to show the ad after 9pm to ensure the ad was not scheduled to be shown when children are watching. It admitted that one TV station had in error shown the ad on a few occasions between 7.30pm and 9pm, but Unilever said the mild images were unlikely to cause serious offence.

Unilever also made efforts to ensure nobody in the ad was shown to be hurt or frightened as a result of the “epidemic” and that the spot made it clear the plane had landed safely because the passengers needed to undress, not because of a problem with the plane.

The Advertising Standards Authority ruled that due to the “comic” nature of the ad, its post 7.30pm restriction and the unrealistic scenarios featured it was unlikely to cause serious or widespread offence to viewers. It is allowed to continue in its current form.

Last year Lynx had two separate ads banned for being “degrading to women” and unsuitable for children. 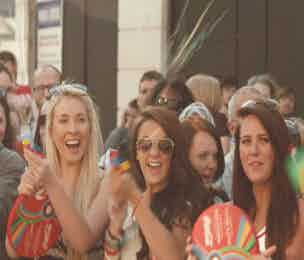 Coca-Cola is to entwine real imagery from the Olympic torch relay and its Mark Ronson-led ‘Move to the Beat’ activity as it looks to build excitement and “hero” young people in the final days leading up to the Games.