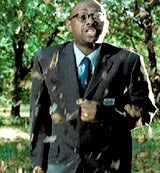 It’s not very often an ad creates a star, but Halifax’s “Sex Bomb” execution has done just that.

When Halifax employee Howard Brown appeared in the ad, singing said song, with lyrics adapted by the building society’s creative agency Delaney Lund Knox Warren, it seems many female viewers were turned on to more than his current account.

Hundreds of fan letters for the slinky mover arrived at Halifax headquarters. And then life-sized cardboard cut-outs, placed in branches, started to disappear – no mean feat when you consider he is 6ft 1ins.

Now the ad is back on TV due to popular demand. “We’ve created a bit of a monster,” says a spokesman. The bank is so pleased with Brown’s performance that it has asked him to give up his role as Sheldon branch’s customer sales adviser. He now does public appearances and spots on shows such as This Morning. It doesn’t get much better than that.