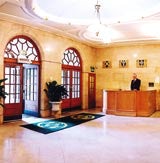 The UK has a good reputation for many things, but service with a smile is not one of them. Matters have improved since the Eighties, as the service industry has become an increasingly important part of the UK’s economic psyche, but we still lag behind the Far East and the US.

Service is a particularly crucial issue in sectors such as the conference industry. The problem is that everyone knows service levels in this sector – especially in hotels – are not what they could be, but there is little industry-wide impetus to do anything about it.

A few months ago, Malcolm Miller, executive director for the conference centre at Church House in London, warned that the UK conference industry could be in danger of losing the battle for overseas business if it did not maintain and develop quality standards. He said too little emphasis was being placed on achieving industry-wide standards and that insufficient attention was paid to the contribution of conference staff.

“The facilities obviously need to be good, but the service provided by our people can often get overlooked. Without industry benchmarks, venues are unlikely to improve their people standards,” he says.

It’s not as if the conference sector does not want to provide high levels of service, but it faces a struggle with staff. Walk into any hotel in London and the staff are unlikely to be English. This is not a problem in itself but there are broader implications. It is quite common for continental Europeans to come to the UK for short spells, often to improve their English, and they are often hired by large hotels. Unfortunately, these hotels are not willing to invest in training and development because they don’t expect these staff members to stay for more than six months.

In fact, hotels come in for the most criticism from the conference sector. Peter Rand, chairman and chief executive of conference company Peter Rand Organisation, says hotels are investing in bricks and mortar, not people.

He also criticises the corporate culture of many international hotel chains: “The UK is the headquarters for some of the world’s largest hotel groups. The ownership of those groups changes very quickly. For example, Granada bought Forte relatively recently and now it wants to get rid of it by Christmas. This does not give the people who work there any confidence. It leads to an asset-stripping culture.”

Philip Catlow, managing director of Catlow Consulting, says hotels spend too much money and effort on branding big events but not ensuring quality of service. “You have hotels that will spend millions of pounds redesigning conference facilities, but the standard of delivery remains pretty poor,” he says.

But the attitude of hotels is not the only problem: the conference sector itself seems incapable of initiating any industry-wide training solution.

Says Miller: “There are many courses out there, but none of them leads to any formal qualification. We have to make judgements about which courses we should send our staff on just from reading about them in books.”

The only benchmark around which guarantees levels of service, says Miller, is an initiative by the Meetings Industry Association (MIA) called the Hospitality Assured Meetings award.

Catlow acts as a managing agent for the award on behalf of the MIA. He says the idea for the scheme began about six years ago, after MIA research among conference buyers showed that although there was plenty of information about venue facilities, there was no guidance as to how well those venues would perform on the day.

“There is the Investors in People scheme, but that concentrates on processes,” says Catlow. “We needed something that indicated performance.”

The Hospitality Assured award comprises two main elements. First, a professional service standard, where the business is scrutinised and its service delivery is judged. Second, the delegates and organisers assess the venue and its service.

“We have created a benchmark which awards both parts of the standard a percentage score, which is then given to the buyer,” says Catlow.

But this still doesn’t solve the problem of lack of staff training. Catlow admits the UK’s conference sector has a reputation for low wages and demanding difficult hours from staff.

“Our industry has a poor record of investing in people,” he says. Buyers, he insists, are becoming more sophisticated and the UK faces increasing competition.

“I was talking to a conference organiser from Italy recently, who said it was cheaper to take a conference to South Africa than to London. Spain and Malta have just launched quality initiatives and Greece and Cyprus are looking into it as well,” he says.

This increasing competition is reflected in industry statistics. According to the latest UK Conference Market Survey, there has been a decline in the number of events in the UK and the total value of the market. Corporate events fell by one per cent – 4,000 events – and the total value of the market fell from &£2bn to &£1.7bn. The number of overseas conference visitors fell from three per cent to two per cent of all delegates between 1998 and 1999.

Some of this may be blamed on the strength of the pound, but not all of it. Jeremy Taylor, head of logistics at event organiser Jack Morton, says: “Service standards niggle me in London and there are reasons why these standards are poor. In London, particularly, salaries are not good and that attracts a certain level of staff. London attracts travellers who stay in a job for three to six months and then disappear.”

Taylor says the problem with large venues is that they don’t have constant business throughout the year and therefore rely on contracted-in staff for big events.

Because Jack Morton is ISO9001-accredited, Taylor says, the company provides its venues with a clear supplier specification.

“This document goes through what we need minute by minute, hour by hour. I’m going to Disney land Paris next week for a five-day event. The specification document is 90 pages long and we have been over it with the company four times,” says Taylor.

Taylor bemoans the fact that in the UK, at any rate, there are too few satisfactory venues, sometimes forcing him to use places he would rather avoid. He also admits to having several blacklisted venues.

Tony Rogers, executive director of the British Association of Conference Destinations (BACD), says there are a number of courses and training events for the conference sector, but he admits that “overall, the provision is patchy”.

He adds: “There is a real need to raise the quality of provision as and to change attitudes towards a service culture for the 21st century.”

Rogers recounts an experience which illustrates how bad things can be. “I was involved in running a training course in one of the remoter parts of the British Isles. I had informed the venue in advance that I needed Powerpoint for my presentation. A few days before the course, the venue rang me to check whether by Powerpoint I meant having an electrical socket in the room.

“From a buyer perspective, such a level of ignorance on the part of the venue does not inspire confidence that our expectations will be met at the event,” he adds.

But apart from individual efforts, there seems to be no prospect of an industry-wide training and development scheme, and no one is willing to commit themselves on when this is likely to happen.

According to Rand, it simply won’t happen until the service industry manages to improve its image with school-leavers and adults alike.

“People don’t see hospitality as a first class business to be in,” he observes.

On a positive note, senior management and consultants in the sector seem to be looking seriously at ways to improve levels of service. But until they can agree on industry standards for quality and staff training, levels of service at grass-roots level – which is where it really counts – will remain patchy.