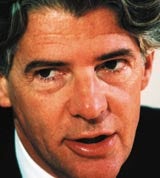 Carlton Communications chairman Michael Green has been forced to step down as executive chairman designate of the merged ITV after sustained pressure from shareholders.

Green tried to rebuff shareholder demands to relinquish his position at ITV plc, but was left with little choice after Granada’s board failed to give him backing at a meeting on Monday. He will continue as chairman of Carlton for the time being.

Fidelity and other shareholders, in aggregate accounting for 33 per cent of Granada’s equity and about 36 per cent of Carlton’s, had given Green until yesterday (Tuesday) lunchtime to step down and make way for a non-executive chairman from outside the two ITV companies. Names tipped for the post include Sir Brian Pitman, a former chairman of Lloyds TSB; and John Nelson, a former Lazard Brothers vice-chairman.

Prior to the decision by trade and industry secretary Patricia Hewitt to give the go-ahead to a Carlton and Granada merger, shareholders had questioned the suitability of both Green and Charles Allen, chairman of Granada, to run a merged ITV following the ITV Digital debacle.

Paul Richards, an analyst at Numis, believes that Allen, who is due to take the role of chief executive at ITV plc, will survive in the short to medium term as he has regained some credibility among shareholders during the merger process. But he adds: “There have been great strides in rebuilding audience share, but if ITV goes back to losing share then his future could be in question.”

But Accenture media partner Theresa Wise says: “I think Allen is particularly vulnerable. The shareholders will have some of the same reservations about him as they did with Green.”