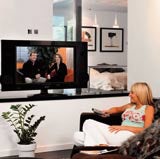 Sharp may have been seen as a safe mid-market consumer electronics brand during the 1980s and 1990s but recent years have seen it repositioning through its focus on high-end TV technology.

The company sees flat panel LCD screens as a key part of a three-pronged strategy, which will also see increased investment and focus on its photocopier and printer division and its solar panel business, aimed at making Sharp a premium electronics brand.

Michael Gabriel, head of marketing communications at Sharp who saw his role extended to all brand communications in the UK (MW last week), admits it is a conscious move to shake off its heritage as a microwave manufacturer and become a provider of “quality technology and innovation” in all the categories it operates in.

He explains: “We want Sharp to be a premium brand rather than in the mid-market. Our markets are crowded with brands and products, and we are looking to create an advantage that has been hidden in the past.”

Sharp, which is the world’s largest manufacturer of LCD screens, announced its commitment to LCD in 2002 when it said it would stop marking CRT TVs and focus on flat-panel technology. Gabriel believes the company has already been proved right.

He adds: “When we made that announcement, the market was still mostly in CRT TVs and it was seen as a bold statement, but it has already been borne out.”

It is a point that many in the industry agree with. One source says: “It used to be a me-too Japanese brand that was just in the mix among JVC and Panasonic, but by specialising in LCD it will leapfrog LG Philips and Sony’s joint venture with Samsung.”

Sharp’s main focus in LCD TVs is its Aquos brand, which is positioned as stylish yet affordable. It stole a march on its rival Sony, he leading TV brand in the UK, by launching into the market in 2004. Sony only responded last October with the launch of its Bravia LCD range.

According to research company DisplaySearch, Sharp has been the leading brand in LCD technology since the market launched. In the third quarter of 2005, it had an 18% share of the market compared to Sony’s 8%. But early results for the Bravia range are promising. The data for the fourth quarter shows Sony’s share increased to 14.6% while Sharp’s had dropped to 13.6%, a decline attributed to supply problems.

But Sharp will reinforce its strong position when it opens its eighth-generation LCD factory later this year. The move will put it way ahead of its competitors, which are still on fifth-generation factories, by allowing it to produce the product more efficiently and cost effectively.

The UK LCD market is the number one market for flat panel TVs in Europe. Last year, it was worth &£1.2bn and 1.8 million units were sold in the UK (GfK Media). James Randall, commercial director at technology data company GfK, says there is still vast potential for growth as penetration across UK households is less than 10%. A number of factors should lead to strong sales in 2006, including the World Cup.

Sharp is looking to leverage its success in LCD across other areas. It is working with Wieden &amp; Kennedy, the agency that launched Aquos, to develop a new European brand position and look, which will be launched in the summer. It signals a more aggressive stance from Sharp. Gabriel explains: “It is time that we stepped out of the shadows and embraced marketing.”