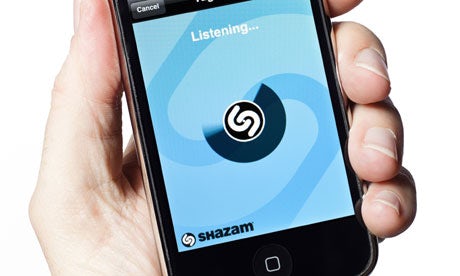 The feature launches for iPhones today (19 December) following its release earlier this year on the iPad. Once turned on, Shazam will automatically listen to everything within reach of the iPhone’s microphone and look for matches to every advert, song or TV show it comes into contact with. Tagged content is then automatically sent to a personalised queue with the app.

The service is likely to spark privacy concerns similar to the ones leveled at the iPad version, however, Shazam is hoping to counter any negativity by pushing the advantages of it now being able to run in the background.

It is touting the app as now being “hands free” for drivers to automatically create playlists of their journey as well accessing exclusive content from radio ads. The app will also be able to create a playlist of an evening out in clubs and bars, it adds. Additionally, the feature works in conjunction with the company’s tie-up with US cinema ad technology company Screenvision allowing viewers to capture Shazam-enabled ads before the movie.

Daniel Danker, Shazam’s chief product officer at Shazam, says the update is a “leap forward” in its expansion efforts. The company aims to bolster its profile to marketers outside its domestic market of America in an attempt to build more sustainable revenues streams. Most recently, it has been working with Microsoft around the launch of its Xbox One console and has also been working with Cadbury.