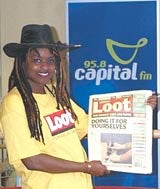 “Help wanted”. “Guitar for sale”. “Used car – only ten careful owners”. All ads you would expect to find in a free ads paper. But Loot has decided to broaden its remit. It recently launched a section called “Sales of the unexpected”, which features weird and wacky items, ranging from a genuine dinosaur egg to a cinema.

To promote the section, Loot followed up this ad: “Female singer, voice so soulfully hot it should be advertised in the fires and heater section. Also writes songs, wicked harmonies and hooks, Cheyne”. Loot telephoned the poor girl and dragged her around several radio stations to promote her talent and, of course, Loot. Whether it will boost sales and catapult Cheyne to the top of the charts is debatable, but as Loot’s latest promotional campaign says: “It’s the way you sell ’em.”

Virgin Energy has been forced to cease all marketing activities in some areas of London, following a clash with the London Borough of Enfield’s trading standards unit, which is investigating complaints of mis-selling. The utility company, which is part of the London Electricity (LE) Group, has stopped all direct sales activity in Enfield and Edmonton, […]

The BBC’s DTT plans should get the platform off the ground, but the interests of advertisers – and some channels – may be poorly served, says David Benady