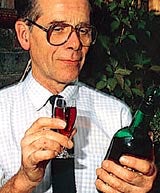 As regularly as Halley’s comet, every few years the next effort to re-position sherry (or cognac or Scotch) appears. Each time the approach is the same. Diagnosis: lack of appeal to young people explains the perilous position of the product. Solution: change the packaging and show young people buying the product and snogging passionately, preferably at the same time. Engaging though these images may be, history suggests that this approach is not the answer. Sherry, despite its long-term decline, remains one of the biggest-selling alcoholic drinks in the off-trade. Spanish sherry is a unique and delicious product whose styles trip mellifluously off the tongue: fino, manzanilla, oloroso. It takes a discriminating consumer to appreciate decent sherry, which may explain why its core drinkers are women of mature years and judgement, drawn in the most part from the better classes of society. Quite apart from the inherent appeal of such a consumer base, I note that while 20to 34-year-old men will decline in numbers from their current ten per cent share of the population, over the next two decades, women aged over 45 – the heartland of sherry – will increase proportionately, from 21 per cent to 25 per cent. What a wonderful marketing opportunity.

As a loyal and loving wife, I was very concerned to read in last week’s Diary that life has been “a bit hectic” for my husband, Matthew Patten. Since the recent birth of our fourth child, Matthew has been rushed off his feet with breakfast meetings and evening receptions, which often require him to stay […]

Burton replaces Tony Dangerfield, who has been promoted to operations director for the southern area. Reporting to chief executive Stuart Burnett, Burton will be responsible for all UK and international marketing for the group, which has 56 four-star hotels across the UK. “The group has made a significant investment in renovating and upgrading its properties […]

Patrick Sherriff, marketing director of The Times and the Sunday Times, has left the newspaper group without a job to go to. Sheriff, who has filled the role since Toby Constantine left in 1999, says he plans to take a short sabbatical to consider his options. His resignation takes place with immediate effect. Marion Rose, […]