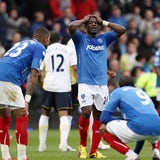 Keith Potts, CEO of Jobsite, described the administration as “disappointing” and a “bitter blow” to the club and its fans but said it remained dedicated to the partnership.

“We remain a committed main club sponsor of PFC at the present time and are united with the fans in supporting the team,” he adds.

The move means the club, already bottom of the league, will have nine points deducted and will face almost certain relegation.

Portsmouth, FA Cup winners just two years ago, is understood to be about £70m in debt. Relegation will mean the club will miss out on Premier League television money and the global exposure that attracts sponsors.

Local firm Jobsite signed as shirt sponsor last summer. As part of the deal, the Fratton end of the club’s home ground became the Jobsite Stand.

Other sponsors include Thomson Sport, Ladbrokes and Seatwave.

Carlsberg, the club’s official beer partner, says it will “work with the administrators going forward.”