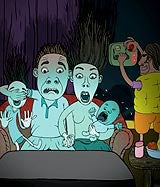 The Independent Television Commission’s (ITC) decision to ban the latest Tango commercial has triggered howls of protest from agency and client alike, and once again called into question the policing of TV ads.

Many observers believe the move is part of a major power struggle among regulatory groups as they attempt to clamp down on shock ads.

The controversial Tango execution, which was suspended following a flood of complaints that it encouraged bullying, had days earlier been cleared by the ITC’s sister body, the Broadcast Advertising Clearance Centre (BACC).

HHCL &amp; Partners, which devised the ad, and client Britvic claims it has been caught in the crossfire between the two bodies.

HHCL chief executive Robin Aziz says: “The difference of opinion between the BACC and ITC over this is amazing. We are not blaming the BACC, but we are surprised at the ITC’s decision.”

Aziz pleads innocence over accusations that the commercial encourages bullying in schools: “It was a complete surprise.”

His views are echoed by Britvic marketing director Andrew Marsden: “There was no discussion of bullying within our company, or at the agency. If it had encouraged copycat behaviour, we would have pulled it ourselves.”

But BACC director Uisdean Maclean says those involved were only too aware of the ad’s potential repercussions. “The issue of bullying was raised at a very early stage in our discussions with the agency,” he says. “As with any ad, it is our job to anticipate the effects and how it will be received. On this occasion, the agency persuaded us that it would be seen as humorous.”

The fact that Maclean enters into a dialogue with agencies from the script stage is seen as crucial to his role. He adds: “We are there to ensure ads get on air, and stay there.”

He denies that in the process the BACC gets too close to agencies and looses its objectivity: “There is no danger of us going native.”

This view is largely born out by agencies, which are frequently frustrated in their efforts to get relatively innocuous ads past the BACC’s copy committee, which meets monthly to consider potentially controversial scripts.

Agencies – in the form of Institute of Practitioners in Advertising (IPA) president and HHCL chairman Rupert Howell – have been instrumental in securing a 20 per cent increase in BACC funding to help it cope with a huge rise in the number of ads it has to vet.

In his inaugural speech to the IPA in April, Howell said agencies were “caught in the crossfire” between the Copy Committee, BACC and ITC, which, faced with multiple-choice scripts and demands for quick responses, were unable to cope. “I want to discuss with the IPA, Incorporated Society of British Advertisers and BACC what we can do to help make the process more efficient and as pain-free as possible.” Howell claimed he was not attacking the BACC.

When it was set up by broadcasters in 1993, the BACC had just two staff and vetted 18,000 pre-production scripts and 12,000 finished ads a year. It now handles twice as much work, while its secretariat has grown to 27.

The ITC is backing the BACC, claiming that, far from creating confusion, the Tango debacle proves its codes work. A spokesman says: “We have a good relationship with the BACC. There are occasions when it passes an ad which we later suspend, but not often.

“Offensiveness is a grey area. We have to ask: Would most of the public be offended?’ We could get hundreds of complaints, but might take the view that the general public would not be offended. It is not that the BACC is doing anything wrong, but it is hard to judge what the audience’s reaction might be before the ad is broadcast.”

According to the ITC spokesman, another problem stems from the fact that agencies don’t always let the BACC in on the full story: “It may pass an ad because it has been given evidence that it is OK. But it might have been misled in some way – or given incorrect information.”

Nevertheless, only 49 of the 25,000 ads passed by the BACC last year were subsequently banned by the ITC. Of these, 80 per cent fell foul of the laws against misleading consumers, rather than over matters of taste and decency or social responsibility.

What tends to happen is that scripts are censored – often beyond recognition – and ads re-shot and re-edited until they conform to the codes. This is particularly true when sexual content is involved. More often than not, the agency will use humour as a defence, only to find the BACC does not share the joke.

Last year, Leo Burnett was forced to re-edit a spoof Carry On film ad for Golden Churn when the BACC ruled it was too near the knuckle to be broadcast before the 9pm watershed. Burnett UK chairman Gerard Stamp, who is preparing a seminar on sex in ads for the IPA, says: “We had to re-edit the ad and take out every double meaning. What we were left with looked like a Carry On film, but without any of the humour.

“When we showed the original at Cannes, it was voted one of the top ten funniest ads ever.”

But a recent risqué ad by TBWA GGT Simons Palmer for Pretty Polly bras was allowed to remain on air, despite 43 complaints to the ITC, because its “seaside postcard” style distanced it from reality.

Some agencies have even been known to ignore the BACC’s advice at the script stage and go ahead with a shoot in the hope that, once the body has seen the finished product, the copy committee will change its mind.

The ITC is drawing up a new set of guidelines, and many in the industry believe it is only a matter of time before it is superseded by a single regulatory body with responsibility for all ads, including press, cinema and Internet work.

Many in the industry believe the ITC is cranking up its bid for the job of super-regulator. If this is the case, more Tango-style rows are surely on the horizon.