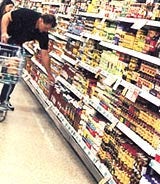 Three per cent of grocery shoppers claim to do a major grocery shop every day. At the other end of the scale, six per cent go once a month only. More than half of all grocery shoppers go to a supermarket in a high street or city centre to do their regular major shopping; slightly more than a third shop at an out-of-town supermarket; and only two per cent use an independent grocer.

Broadening the definitions of this research to all adults and all shopping, at what time of day do adults generally go shopping? Between Monday and Thursday, people normally shop in two-hour blocks, with 10am to noon being the most popular time. This is the peak time for housewives and the elderly to do their grocery shopping. In fact, women are 20 per cent more likely to be shopping at this time, while adults aged 60 or over are twice as likely than the average shoppers to be doing so.

But what about full-time workers (30 or more hours a week) ? There is no day of the week when they are likely to be shopping. The most popular shopping time for them is between noon and 2pm, when seven per cent are in the shops – no surprises here of course, given that it is the time many full-time workers would be at lunch. According to BMRB, the tracking of these times could allow marketing and media planners to get their messages across, by reaching them with advertising shortly before they hit the shops.

BMRB TGI says that between 8am and 10am on a Saturday morning, 16 per cent of shoppers with children in the household, who work full time, are listening to the radio, and another 19 per cent are watching television. At this time, only seven per cent are shopping. However, between 10am and noon almost a quarter are out at the shops – the highest proportion at any time of the day. BMRB TGI concludes that advertising on TV early on a Saturday morning could reap dividends by bringing a product to the front of this group’s mind as they get ready to hit the shops.