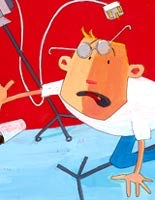 As the audience files in to the auditorium, an unpleasant tightening in the pit of your stomach keeps nagging like a slowly awakening conscience. This is, after all, a major event, one where your organisation has a high degree of visibility both to its own, internal audience and your all-important retail partners. And yet, it never seemed quite important enough to claim your undivided attention in the build-up to the big day. So many other projects, so many meetings. You approved the choice of production company, attended the first few briefing meetings, then left things – you hoped – to run themselves.

You try to reassure yourself with the thought that Oliver, although young, is very bright and very keen. A 2.1 in something or other. Clever chap, anyway. He seemed all those weeks ago to be the ideal person to follow the project through with the production company. After all, delegation is what management is all about, isn’t it? And the production company itself? Very thorough, very experienced, the team certainly know their stuff when it comes to lighting and staging and sound. No need to worry; just first night nerves. It’ll be fine.

The last of the audience files in. You catch a significant nod in your direction from the chief executive, making you uncomfortably aware once again that in the eyes of your colleagues, this one is your show. The lights dim, and the conversation dies to an expectant hush.

What follows is probably the longest 90 minutes of your life. Oh, nothing goes wrong – wrong as in the sound system exploding or microphone stands randomly falling over – and indeed, as a technical exercise there was a great deal to commend it. The effect of the first ten rows of the audience sitting in a sea of dry ice, their heads marooned in the mist like seals or shipwreck survivors treading water, manages to be both ethereal and unexpectedly poignant. You half expect to see Kate Winslet and Leonardo Di Caprio bobbing past. The dancers, too, were beautifully choreographed, if a little scantily clad. Had you mentioned your chairman’s deep religious beliefs to the production team? Hang about, had you even mentioned dancers?

And as for the music and light showit was good, very, very good. Even Pink Floyd, or Freddie Mercury at his most camp, would have envied the lasers, the sudden Ibiza-club shifts of colour and mood, the pounding bass. It’s just that for a company that’s about to announce a profits warning, with significant job losses – natural wastage, of course – and a new, eco-conscious approach to the market, it might be seen to be a tad overbearing. A bit too triumphalist. Or to put it another way – the way, in fact that your chief executive put it to you later – the entire event was so far off target that it would be charitable to assume you were working for the opposition. Which, concluding his chat, he warmly invited you to do.

So, as you glumly retrieve the CV from the files of your word processor, you wonder “What went wrong?”

First point to be made is that there are no scales of importance when it comes to communicating with an audience. If a TV commercial is important, so too is the response-handling method. (Ever picked up the phone after seeing or reading an ad, to be put on hold for ten minutes? Of course, we all have.) If a piece of direct mail is important, so is the name and address on the envelope. (And will the numerous organisations that persist in using the database that lists me as “M Suallou” kindly stop wasting their money and my time?). If a conference, launch, show or event is important enough to have an objective and a budget, then don’t give it to Oliver the graduate trainee. That’s not delegation, it’s abdication.

The second point is that “production company” is a highly elastic term. As in any industry, there are some rogues, but no one in their right mind would entrust their event to a production company without at least ringing up a few previous clients, so we can assume you’re not going to fall for a cowboy outfit. No, the chief problem is that some production companies are doers, while others – inevitably, a little higher up the cost scale – are both doers and thinkers.

Doers are great. They frequently have a wealth of experience; could erect a complete set and staging on the north face of Mount Everest, if required to do so; have forgotten more about projection and lighting than you’ll ever know; and are generally a great set of highly skilled people who do a fine job at a sensible price.

“Doers” are the master craftsmen of their medium. But they’re not usually interested in, or good at, the message. When given a free hand to design a show, they tend to push at the technical boundaries of their kit. They will certainly throw technology at the brief if involved in the beauty parade of a pitch. But technology, per se, is not necessarily what you need or want.

So much for the Doers. What about the Doers and Thinkers? The Designers and Communicators? As you’d expect, I happen to believe that as conventional media edges closer and closer to the consumer’s saturation point, so it becomes increasingly important to have a strategic, creative and consistent approach to other forms of brand experience. Having left advertising to join a design and communication agency, I’ll admit to being biased. But equally, I’d argue that the strategic, message-driven approach to production only works if both sides make a long-term commitment to the relationship.

Short-termism leads to inconsistent communication. It also leads to some major headaches when it comes to reconciling invoice with budgets. All those extras. The additional autocue and lectern. The extra hotel rooms and subsistence for the num erous crew members whose presence was re quired because of some throwaway comment – interpreted as an absolute order – you made on dress rehearsal night. Suddenly, your ten per cent contingency budget is starting to look woefully inadequate.

Without condoning the practice, it’s easy to see why some production companies load the extras. The pitch process encourages them to provide the biggest bang for the buck. If the pitch is for an event, film or show that’s a one-off, the job has to make a profit. But the first project that any agency or production company does for a new client is – or ought to be – the most time-intensive because it takes time to get under the skin of your company, understand its products or service, its ethos. So who pays for the learning time? You will, somehow.

Imagine applying the same process to your advertising strategy. You decide to hold a pitch, prepare the brief, arrange in-depth briefings for the creative teams and the account teams to hold with your key people and departments, set up the factory tour and the product demonstration, choose the agency partner that comes up with the correct solution, run a six-week campaign, then say goodbye and start the process all over again.

So, if you’ve had unhappy experiences with production companies in the past, I’d argue that you were either unlucky in your choice, or doing something wrong. No one can legislate for the former, but it’s fairly simple to avoid the latter.

How? First, make the brief realistic; none of this ‘we’re not going to tell you the budget, we’re interested to see what you come back with’, which is a recipe for blue-sky imagination overflowing the pot of budgetary reality. Pick companies on the basis of their track record, and check them out with their previous clients. Don’t pick doers when you want thinkers (or vice versa) and above all, think long and hard about the benefits of working together for an extended period of time. You’ll get a better creative product, a better relationship and fewer nasty shocks at the bottom of the invoice.

One final thing. Bring Oliver with you to the meetings, by all means. But don’t send him in your stead.