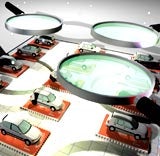 Towards the end of last year, it became clear that the London Motor Show at Earls Court was facing some fundamental problems. The show has been running for 100 years and the format has changed little in all that time.

Traditionally exhibitors have built their own stands on floor-space rented from the organiser. The organiser promoted the event, and people turned up to look at the cars.

For a time it was a dealer show, but, for the past decade or so, it has consisted of manufacturers exhibiting alongside each other.

People used to go to the show to see product launches. Recently however, the cars at the show have been available on the showroom floor for some time and so the drama of unveiling has waned. If you look at old photographs of the show, you will see a lot of cars sitting squarely on the floor with banners above them. As brand awareness has grown, this has become an increasingly rare sight. In an attempt to achieve brand differentiation – in a market where differentiation has steadily diminished – manufacturers began to place cars in a stand environment, which owed more to contemporary museum design than a car showroom.

So far, so good, until last year, when the car industry experienced well-documented financial problems. The press campaign about price-fixing in the UK resulted in a massive discounting exercise, with potential car buyers hanging on until the adjustment had bottomed out. In short, the public stopped buying cars for a while.

This resulted in manufacturers looking closely at where they could cut down on their marketing spend. As the effectiveness of exhibition expenditure has always been difficult for car marketers to quantify, these budgets were first to be cut.

At about £1,000 per square metre, the exhibition brand experience was seen as an expensive animal. At about £500,000 for a small stand and up to £5m for a show-stopper, manufacturers began, one at a time, to pull out of the show. Then, at the end of last year, Clarion Events asked my exhibition and design consultancy, Work, to get involved.

Clarion is run by Andrew Morris. The Morris family is well known in the exhibition world, for turning the Agricultural Halls in Islington into the Business Design Centre. If you have been there, you will notice that design is a very strong element of the location.

It was with this strong design influence in mind that Work was asked to redesign and revitalise the upcoming London Motor Show at Earls Court.

The first thing we looked at was the visitor experience.With the show’s old format, you really had to be a petrol-head to want to go. The day involved visits to dozens of stands, each displaying an entire range of a manufacturer’s product. If you wanted to buy a small family car you still had to do the rounds of all the stands to find the models you wanted to sit in.

The previous set-up was like shopping at a supermarket that had a United Biscuits aisle and a Nabisco aisle.

Next, Work examined the relevance of the show’s brand experience. In the exhibition sector, the tendency is to veer towards the “touch it, feel it, smell it” experience, instead of the popular virtual experience. But we’ve all seen the interactive touch-screen approach and frankly, people can do that at home.

Richard Seymour – one half of design consultancy Seymour Powell, that boasts clients including Nokia, Dell and Yamaha – has identified in his SuperHumanism movement, that there is a consumer-driven desire for a move back to the real, rather than virtual experience.

In essence the idea is simple. At the new-look show, manufacturers won’t be building brand experiences. Instead, the organisers – with Work’s help – will provide the car stands themselves. The cars will be displayed by type – all the super-minis on one stand; all the executive cars on another. The stands will be designed to represent car types and, up to a point, the lifestyles of the people who aspire to buy them.

Real objects will take the place of computers and there will be some humour involved too. After all, humour sells.

Manufacturers will be offered a single car space for £10,000 – ten cars exhibited for £100,000 instead of £1m- and each car will have a purpose-designed sales point next to it, staffed by the exhibitor. Manufacturers will have their products showcased in front of about 350,000 visitors, most of whom will use the show to help them decide on a future car purchase. Research carried out at the 1999 Motor Show by Clarion found that “45 per cent of them [visitors] were expecting to order a new car sometime in the following 12 months.”

A ground-breaking development at the show, is that visitors will be made up of some people who aren’t petrol-heads and just want to buy a car. Clarion is presently forming media partnerships for each of the stands (or showcases as they are now called), so you will be just as likely to read about the show in a lifestyle magazine as in Autocar.

People with little time to spend at the show, will discover that they can make a straightforward buying decision in a relatively short time.

Through traditional advertising, the brands of the different manufacturers will already be imprinted on the minds of the visitor – it’s not as if they are going there without a pretty clear idea of what they’d like to be seen driving around in.

A fun day out

At the new-look London Motor Show, visitors will be able to make up their minds over a buying decision easily and comfortably.

We expect a lot of people to be able to reach a final buying-decision there and then, rather than leaving, wishing they’d been able to see all the cars on their list and worrying that they might have missed something.

Finally, they’ll have a fun day out. They’ll walk around, with their kids and partners, talking about the huge magnifying glasses hung over the small cars, the pinstriped carpet on the executive stand and the traffic wardens on the city cars and super-minis showcase. Happy and interested people are a lot more likely to spend money.