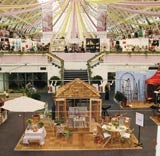 London’s Olympia was the venue. Inside, one of the UK’s most popular women’s magazines was brought vividly to life. Visitors could wander through the pages of their favourite title, getting relationship advice and medical tips at live seminars held by leading agony aunts and practitioners. They could sample the latest hair and beauty products, check out the current fashions from high street stores such as Top Shop, bathe in the glamour of a host of designer labels or watch models show off the cutting edge of couture on the catwalk.

“It was a huge event and was initially very successful,” recalls Cosmopolitan group publishing director Jan Adcock. “But the cost of staging it was enormous for organisers and exhibitors.”

At first this could be justified, because women couldn’t get access to many of the products and services on display anywhere else. But in the late Nineties this changed. “As time went on there was a retail resurgence on British high streets,” says Adcock. “The public didn’t need to go to an event like the Cosmopolitan Show to find designer labels or beauty salons – they could all be found on their doorsteps. The event wasn’t offering anything unique and the enormous spend required to create retail units within a retail unit became prohibitive.”

Perhaps this provides more than a hint as to the reason why more leading magazines don’t host exhibitions for their brands. On paper it sounds like a great idea, particularly for a market-leading title with a big readership and healthy ad revenue. Readers become visitors, while advertisers set up stands as exhibitors, and there’s a ready-made publicity source in the magazine itself. However, the key point is how well the magazine translates into a show and whether there is sufficient demand in the market to support the high costs involved.

A leading consumer title that has seen its show go from strength to strength is Country Living. It has a three-strong events team running seven shows across the UK that play host to a broad range of exhibitors that only come together for these kind of events, presenting the visitor with a unique experience they are unlikely to find anywhere else on the same scale.

Despite this selling point, an incredible amount of time and effort is required to make these shows successful. The close tie-in with Country Living magazine adds further pressure, because any problems will reflect badly on the title.

“These shows are the public face of Country Living,” says Liz Kershaw, executive group publishing director for Country Living and sister title Good Housekeeping. “They are all important. There is a great attention to detail to make sure the shows reflect the essence of the magazine and standards must be consistent across all of them. We check every person who wants to exhibit and turn away a lot of applicants. We need to have a good spread of products and services to enhance each event. We also look for an exhibitor ‘churn’ to prevent the same people exhibiting every year to maintain visitor interest.”

Lots of PR and marketing goes into each show. “It’s like launching a new product each time,” says Kershaw. “Colours and themes must be up to date and look fresh in the same way that every issue of the magazine must look different and appealing.”

Asked why more shows aren’t launched by successful magazines, Kershaw says: “I understand why some publishers shy away from them. They can be frightening. There are so many things to do. You literally have four or five days to recoup a huge amount of expenditure – there is no second chance.”

She claims there are two main reasons for launching a show on the back of a magazine: fame and fortune. The former to heighten brand awareness, and the latter to make a profit.

As with any show, planning is paramount. With a magazine-related show, readers and subscribers must be informed well ahead of the launch date. “Just in the way that our readers feel that Country Living is their magazine, they need to feel ownership of the show,” says Kershaw.

Readers can prove invaluable when planning a show. Titles can tap into the mood of the market through questionnaires in the magazine or direct mailings to subscribers. This is a great way of testing out ideas for content, which is also easier to assess for magazine-related shows, as a good starting point is the editorial team, which will already know the key industry issues. What’s more, as the advertisers are the best potential source of exhibitors, the advertising sales team will already know most of them.

Although this sounds straightforward, Energy PR managing director Louise Findlay-Wilson, who has been involved in the organisation of a number of shows, both magazine-related and otherwise, offers a word of warning. “There are fundamental differences between shows and magazines, which would-be organisers ignore at their peril,” she says.

“It’s easy to get someone to sign-up for a year’s subscription to a magazine – it’s a quick decision and they can read the magazine at their leisure. Persuading the same person to take time out of the office, on a fixed date, to visit an event is a much bigger challenge.”

This is why, although readers are a good place to start, to get the right level of attendance, publishers need to look way beyond the confines of the readership. “They have to get other media excited about – and writing about – their show,” says Findlay-Wilson. “This means the event needs to have news potential and ‘must-see’ features, which other media, even those with no commercial interests in the event, will write about.”

So although the magazine behind the show launch provides a great publicity platform, to realise an event’s full potential, this must be built on using as much other relevant media as possible. And the content of the event is critical in attracting the maximum media attention.

“As a PR agency, we frequently find ourselves working closely with event teams, helping them identify the show features, speakers and content ideas that will catch the media’s – and visitors’ – attention,” says Findlay-Wilson.

“For a consumer show we may suggest the right celebrities, demonstration areas, sponsored advice clinics, workshops, show-floor entertainment, big competition initiatives and so on. For a business-to-business event it might involve us working with key industry bodies, legislators, government departments and industry experts to develop innovation areas. In both instances, the key aim is to find the ingredients that will give the event real vibrancy and news value.”

Karen Parks, who organises the Medical Device Technology (MDT) event, launched on the back of Medical Device Technology magazine, agrees that in the business-to-business environment in particular, these “partners” are crucial to the success of an event. “We form partnerships with 12 other magazines and all relevant professional bodies and trade organisations,” she says. “We’ve even forged a relationship with Messe Dusseldorf – which runs Medica, a similar event to MDT in Europe – for cross promotions.” This not only increases MDT’s visitor numbers, but also raises the show’s profile.

The proof is in the planning

There are many factors specific to launching a show, regardless of what it is based around, from monitoring and measurement of exhibitor and visitor satisfaction at the show, to an effective follow-up policy to assess the success of the event. Just as a good PR company can prove invaluable for creating a media buzz, a good specialist event organiser can take care of the logistical issues, from hiring the right venue to booking the right contractors, not to mention the health and safety procedures. Essentially, there’s no need to go it alone, and attempting to do so could be commercial suicide.

But exhibitors clearly enjoy the publicity and kudos that magazine-related events can generate.

“I definitely prefer exhibiting at shows directly connected with a trade publication as there is an established name brand and perceived value for the event, in addition to a clear understanding of its target audience and potential exhibitors,” says Michelle Dalton, communications manager at MDT exhibitor Medlink West Midlands. “A trade publication also has the added benefit of a robust marketing programme to supplement the exhibition to the target audience.”

Meanwhile, Country Living Show exhibitor Julie Slater, founder of Julie Slater and Son, comments: “We prefer linking with magazines as there is immediately media coverage and PR from the show.”

A significant effort is required to launch a magazine-related event, from carrying out key market research and establishing its viability, to the actually organisation of the show. However, do it well and it has the potential to generate a lot of revenue while boosting the profile of the title in the process.