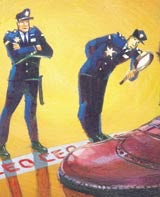 Given the importance of marketing to modern business, it is surprising that so few practitioners of the persuasive arts have taken the reins at big companies. There are some notable exceptions – such as WH Smith, which this month hired former Tesco, Homebase and Currys marketer Kate Swann as chief executive to replace Richard Handover.

But for most marketers it seems that their rise up the career ladder really does draw to an end at 40, by which time they will have probably become a successful marketing director or will be exploring consultancy roles. Few top companies have marketers on their main boards, so for ambitious executives who want to make it to the top, they may find they have to move sideways before they can move upwards.

One of the commonest routes for escaping from a pure marketing role is to become a commercial director, which usually means a job that fuses the marketing and sales roles. This gives wider sales experience than can be gained in marketing and therefore offers the chance to gain some number-crunching skills to add to the strategic and customer management ones developed in marketing. Last week, Coca-Cola Great Britain &amp; Ireland handed marketing director Charlotte Oades the role of commercial director; DIY retailer Wickes promoted marketing director Colin Ball to commercial services director for Focus Wickes Group; and Interbrew gave its global marketing chief Brent Willis the new role of chief commercial officer (MW last week).

This seems to indicate that there is life beyond marketing for those who want it and that marketers don’t have to get stuck behind a glass window watching focus groups or trapped sipping champagne at an eternal schedule of ad agency parties. None of the above were prepared to talk to Marketing Week about their new jobs but it seems they may be being lined up for higher management positions, and will be hoping one day to make it as chief executives.

Some observers believe that Oades may be up for promotion to a global role as a manager of a country. As a fan of modern art, she will need all the cash she can get if she aspires to join the likes of Charles Saatchi as a serious collector. She has worked for the soft drinks giant in a number of marketing and brand management roles in Atlanta and before joining the UK operation was marketing director of the South Pacific region. Oades joined Coca-Cola in 1986 and her well-rounded experience included a stint at bottler Coca-Cola Schweppes Beverages as trade marketing controller.

Her predecessor as commercial director is Paul Gordon, now region manager for France. He came from a sales and channel marketing background at bottler Coca-Cola Enterprises. Oades is transferring some of her marketing responsibilities to the commercial director position, and this suggests her appointment is part of Coca-Cola’s strategy of putting marketing back at the heart of its operations – the company has experienced a period of confusion with its flagship product as far as global brand positioning and marketing messages are concerned. Oades’ promotion comes hot on the heels of Daniel Palumbo’s appointment as global chief marketing officer for Coca-Cola last month (MW June 12). He joins from Eastman Kodak.

He believes that there are more people in senior management who come from marketing backgrounds than is generally assumed. He points to the likes of ex-Mars marketer Richard Baker, who moved on to become chief operating officer of Asda and has now been recruited as chief executive at Boots. Then there is Sara Weller, who moved from Mars via Abbey National to Sainsbury’s, where she is now deputy managing director. And Angus Porter, who became managing director for the consumer division of BT Retail and is taking up the position of Abbey National head of customer propositions.

Porter says that he had worked in other positions such as research and development and sales before he took up marketing, and that marketers do need a general business perspective to do their own jobs effectively and if they are to have a crack at other senior roles. “To be an effective general manager you need to understand the business from front to back, and to be an effective marketer you need to understand it from the same degree. My view of marketing has always been that it needs to be very profitable – marketing is no good if it doesn’t achieve decent business results. Despite that, marketers have problems persuading people they are interested in building the bottom line.” 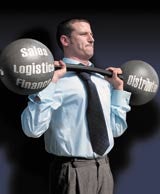 Chartered Institute of Marketing chief executive Peter Fisk the believes that in general, marketers need to become more involved in general business matters and have become too focused on customers at the expense of shareholders’ interests. This is deeply controversial, given that marketers usually justify their roles by referring to the relationships they build with consumers.

“One of the things we are looking at is how marketers can be more effective by speaking the language of the boardroom and how the boardroom can become more knowledgeable about marketing.” He says that when he worked at PA Consulting, research showed that not only do most marketing directors not make it to chief executive positions but the vast majority do not want to. “There’s a challenge for marketers in ambition as well as ability,” he says.

Beyond the personal agenda

Marketers are in general poorly positioned to take on wider business roles, says Fisk, and this has got to change. “The CIM has called for a strategy to help marketers be much more strategic, commercial and innovative. They need to think much more long term despite the fact they are usually driven by short-term agendas.” A CIM study from May shows that only eight companies in the FTSE 100 have marketers on their main boards – BP, Imperial Tobacco Group, Mitchells &amp; Butlers, Morrisons, Rentokil Initial, Safeway, Tesco and mm02. But he also believes that a lot of marketers are not interested in taking on positions in general management as they enjoy the strategic and day-to-day challenges of marketing.

Mike Moran, worldwide director of marketing and strategy for Thames Water, agrees with Fisk that many marketers like the job enough not to want to change to what they see as more mundane business roles. “Marketing has a very glamorous image, it’s enjoyable, though it is hard work. I can see why a lot of people would say ‘why would I want to change this?'” he says.

But he disagrees that a strategy needs putting in place to help marketers reach board-level positions. Moran has worked in a variety of marketing and general management positions and in his last post at Toyota was marketing director then commercial director. “Peter Fisk has been outspoken about how we should champion marketing and put marketers on the board, but that is nonsense. The only people who can guarantee a place on the board is the marketers themselves.”

There seems to be a view that marketers are somehow discriminated against within business, as they demand huge budgets that often seem hard to justify. Finance directors are famously highly sceptical of the claims of marketers and, in truth, talk of long-term brand building from an executive who is going to leave within 18 months can seem a little rich. While sales people, finance executives, operational directors and administrators can all point to clear gains and losses as a result of their activities, marketers are often left using advertising recall and focus group research data to justify what may be the largest expenditure made by a company.

However, time is not on the marketer’s side, since it is seen as a young person’s profession and is not famed for having many people in their 60s involved. It may be a question of getting out while the going is good for many. The escapologists often achieve marketing director’s positions by the time they reach their early 30s – Kate Swann was only 31 when she took up her first directorship as marketing director of Currys. But times may be changing, and we may see more mature marketers staying in their roles, or moving to bigger jobs as they get older. Britvic category director Andrew Marsden, for example, is in his 40s.

It was once believed that marketers would take the business world by storm and stand at the chief executive’s left hand, while finance directors stood at their right hand. But this has not come about, and it seems the ambitious executive starting in the marketing department must look outside the role to find platforms for advancement. They may take the route of Dianne Thompson, who went from commercial operations director at Camelot to become its chief executive.

But marketers who enjoy the job too much to leave will be hoping that ageism in marketing becomes a thing of the past and they can spend the mature years of their careers in the role.