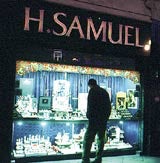 Signet is looking for a new agency to handle the &£1m advertising brief for its H Samuel and Ernest Jones jewellery chains.

The group has parted company with Maher Bird Associates, which handled the &£778,000 advertising account for H Samuel. The agency was only appointed in July last year after a pitch overseen by marketing director Nick Hamley and the Haystack Group.

Signet, which was unavailable for comment as Marketing Week went to press, is also believed to be reviewing the &£300,000 account for Ernest Jones currently handled by RPM3.

At the group’s post-Christmas trading statement last Thursday it indicated that pre-tax profits, due to be unveiled later in the year, would be ahead of forecasts.

Ernest Jones saw underlying sales rise 7.3 per cent in the two months up to Christmas, but the group said a difficult trading environment meant H Samuel had an increase of just 0.4 per cent.