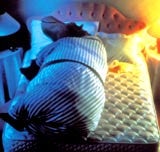 The account will be handled by Feather Brooksbank’s Edinburgh and Manchester offices. The agency, which is part of Carat, pitched against two other unnamed agencies for the business.

Feather Brooksbank broadcast director Matt Hatton recently negotiated Silentnight Beds’ first TV sponsorship – a £6m deal with ITV to sponsor the flagship Sunday evening drama Where The Heart Is for four years. A new 16-episode series of the programme will be broadcast next spring. Hatton says: “The emotional warmth of Where The Heart Is complements the company’s brand values.”

The Lancashire-based bed manufacturer is set to return to TV advertising with a major campaign in January 2001. Mortimer Whittaker O’Sullivan was appointed to the creative account earlier this year (MW May 11).

The campaign will see the return of the hippo and duck characters, absent from the small screen for ten years. The brand has not advertised on TV for three years.