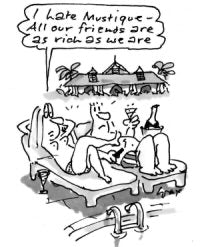 Good news for marketers in search of the zeitgeist, those desperate men and women with one ear to the ground, one finger on the pulse and another wetted and held aloft. You can stand up, brush yourself down and put your fingers away. The choice is between two simple alternatives: either you follow the advice of The Grocer magazine or heed the words of President William Jefferson Clinton.

Speaking for myself, if asked to choose between the accumulated wisdom of a venerable trade paper of distinction and the home-spun homiletics of a vain and posturing windbag from Arkansas, I should have no difficulty in making up my mind. But I fear I am in a minority. To judge from the awe-struck reverence Clinton is accorded wherever he sets foot, there is no truth in his illustrious predecessor’s assertion that you cannot fool all of the people all of the time.

At any rate, the choice is this: either you follow the advice of The Grocer and attempt to recreate the tastes and enthusiasms of the 1970s or you listen to Clinton and tap into something called ubuntu. Choose the former and you will busy yourself re-inventing brands such as Cadbury’s Smash, Blue Nun and Brut aftershave, opt for the latter and you will profit from the fashion for feeling the pain of others. Nostalgia or neuralgia.

Heaven alone knows why anyone should want to hark back to the ’70s, a bleak decade when men wore their trousers flared and their hair long and women burnt their bras, but, as the Romans said, de gustibus non est disputandum, there’s no accounting for taste. Which brings us to the sick-making spectacle of Clinton addressing the collection of misfits, saddos and lunatics who comprise the Labour Party Conference (though in the interest of impartiality it ought to be added that the same can be said of those attending political party conferences of all hues).

Up he swaggered to the rostrum, his head wobbling from side to side in that “Hey, look at me ain’t I a piece of work?” gesture, and proceeded in husky, folksy tones to spout platitudinous drivel that washed over the delegates like a tide of comforting syrup. His message: society is important. Why? Because of ubuntu. Because of what? Ubuntu, it’s Bantu, a language spoken in South Africa and is related to a Zulu concept, “umuntu ngumuntu ngabantu”, meaning a person is only a person through his or her relationship to others.

“If we were the most beautiful, the most intelligent, the most wealthy, the most powerful person, and then found all of a sudden that we were alone on the planet, it wouldn’t amount to a hill of beans,” explained Clinton.

To liberal-left circles South Africa is what ancient Greece was to the neo-classical avatars of the Enlightenment; it is the fons et origo of wisdom. And Nelson Mandela is the modern Plato. The poor man must be wearied unto desperation by the never-ending line of grisly celebrities, political hacks and chancers who queue to be photographed in his saintly presence.

In the right-on world of Democrats and New Labourites, black Africa is blessed with the wisdom that comes of victimhood, and Western Civilisation, horribly white and middle class, is to be despised. Better forget, then, that more than 2,000 years ago Aristotle thought of ubuntu first. He wrote: “Man is essentially, or by nature, a ‘social animal’, that is to say, he cannot attain complete happiness except in social and political dependence on his fellow man. This is the starting point of political science.”

But who cares for the wisdom of some old Greek when we have Archbishop Desmond Tutu? In his book No Future Without Forgiveness he says: “Ubuntu is very difficult to render into a Western language. It is to say ‘My humanity is caught up, is inextricably bound up, in what is yours.’

Difficult? John Donne managed it: “No man is an island, entire of itself…any man’s death diminishes me because I am involved in mankind; and therefore never send to know for whom the bell tolls, it tolls for thee.”

Of course man is a social animal. We don’t need Bill Clinton to tell us that. Nor do we need a word from the bantu language.

In any case, it is one thing to be a social animal, quite another to be in the proximity of some other social animals. Imagine being in the company of Jonathan Ross, Edwina Currie, Esther Rantzen, Tony Robinson, Griff Rhys Jones or Anne Robinson. I’d rather have a plate of Cadbury’s Smash washed down with a carafe of Blue Nun.