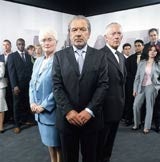 The makers of hit BBC2 show The Apprentice are looking to tie-up with manufacturers to produce games based on the programme, which stars business entrepreneur Sir Alan Sugar. Talkback, the company that produced the show in the UK, has a range of product licensing opportunities available including electronic products, gadgets, executive stationery, books and clothing such as a “You’re Fired” t-shirt.

The Apprentice, which was screened in May, attracted 3.8 million viewers and achieved a 16.6 per cent audience share for the final episode. A second series has been commissioned for the UK and is due to be screened early next year.

Each episode involves Sugar setting the participants various tasks to test their business acumen and entrepreneurial skills. At the end of each programme, he tells one of the candidates that they are “fired” and the rest stay on to compete for the prize of a year-long job at one of his companies, and a six-figure salary.

FremantleMedia, which owns Talkback, has produced local versions of the show in 16 countries to date. Its licensing division, FremantleMedia Licensing Worldwide is managing all ancillary rights for The Apprentice worldwide, apart from in the US.

Trojan Condoms is rolling out its Safe Ride Home scheme across the UK.

Ever since Heinz announced that it is suspending its consumer marketing, premature obituaries have been written about food advertising on television. Brand-building food communication has a future, but agencies and businesses need to be a litt

First Choice is continuing its sponsorship of I’m a Celebrity.