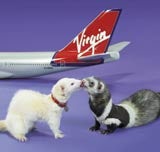 Sir Richard Branson has always been quick to spot a gap in the market. From condoms to mobile phones, Sir Richard has generally been one step ahead of the rest of us mere mortals. The Diary, however, can’t help but feel that he is maybe a little wide of the mark with his latest venture, as Virgin Atlantic is launching a frequent-flyer reward scheme for ferrets.

In what could just be a highly convoluted ruse to deter Richard Whiteley from travelling with Virgin, the scheme will be launched on May 1. The Diary thinks that exactly a month earlier would maybe have been more apt. Ferrets travelling with Virgin for the first time will receive a limited-edition flying jacket and collar tag as part of the Flying Paws promotion. Others pets won’t miss out though, as dogs will receive a T-shirt and dog tag, while lucky feline travellers will be given a toy mouse called Red.

Collecting one point per journey, when the pets reach five points they can claim a hand-made Virgin dinner bowl and a specially designed non-slip mat. Or if they are feeling generous, they can donate 1,000 bonus air miles to their owner instead. No doubt ferret breeders up and down the country are relieved they no longer have to smuggle their pets on flights by stuffing them down their trousers.