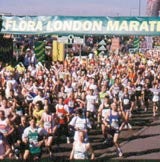 Runners in the London Marathon have demonstrated the power of peer-to-peer marketing for charities by raising more than &£1m online using e-mail alone.

About one in ten runners collected pledges electronically through Justgiving.com, the London Marathon’s official partner for charity fundraising.

Justgiving managing director Anne-Marie Huby says: “Most runners raise funds for personal reasons, which makes them the most powerful advocates of the causes they care about. Justgiving is the easiest and most effective way for them to translate this into cash.”

Sally Richardson, a runner in the London Marathon who used Justgiving’s services, says: “Justgiving has made a huge difference to my fundraising. Most of my friends would be impossible to track down for the traditional sponsorship form and cheque. Justgiving is great for enabling those who are used to e-shopping to make a donation.”

The Justgiving system is designed to save charities time and administration costs. Donations and a 28 per cent Gift Aid bonus are transferred into charities’ bank accounts, while pledges are automatically debited from donors’ accounts after the event.