The deadline to enter the Masters of Marketing awards has been extended! You now have until September 23 to submit your nominations.

One of the categories that will no doubt have a huge amount of competition this year is social media.

To help inspire your entry I thought I’d show you six of the best social media campaigns from last year and the impact they had on the brands that ran them.

The Masters of Marketing is a major stage for sharing and promoting true mastery and excellence in the marketing industry which could lead to a year-round programme of reputation building publicity and press coverage for your business, your work and your team.

2014 was the FIFA World Cup and the first one in which social media played a truly significant part. Adidas wanted to make the most of that.

It partnered with We Are Social in a bid to become the most talked about brand during the event, and that is exactly what it managed to achieve.

Adidas travelled around the world creating video content for it’s ‘#allin or nothing’ campaign, shooting footage of star players to start building the story.

A team was also in Rio for the duration of the tournament to create content that could be shared in real time, and a live-streamed YouTube channel called The Dugout included guest appearances from the likes of David Beckham and Patrick Viera.

Red Bull partnered with Hollier in a bid to shed some light on one of the drink brand’s lesser-known properties: cliff diving.

Using influencer marketing, Red Bull partnered with three popular Instagram users who would not only be the ones to push the content out but also be the crew and camera people who made the content.

The three Instagramers captured 20,000 action shots and Red Bull used them to create a stop motion video of the Cliff Diving World Series.

One important element was the fact that none of the photos ever showed a completed dive, instead creating a teaser that drove people to the Red Bull website to watch the action in full.

To promote its POREfessional range, Benefit Cosmetics UK teamed up with 1,000 Heads to create a campaign that made use of the Twitter API to automatically deliver customised vouchers to users. 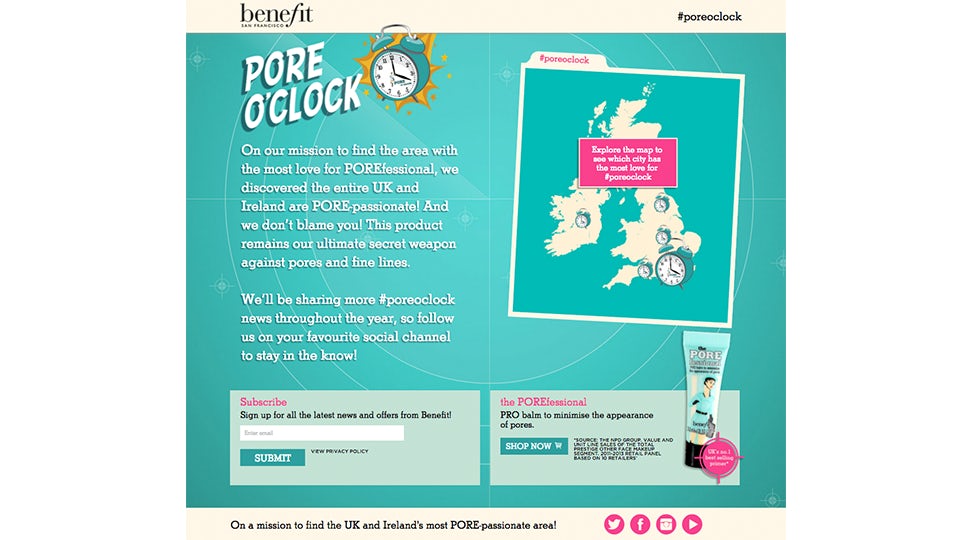 The API generated a reply to anyone who tweeted at Benefit Cosmetics using the hashtag #poreoclock.

Each reply included a unique voucher featuring the tweeter’s name and profile picture, which could be exchanged in-store for a free POREfessional sample.

The tweets were all collated in a digital hub, which also featured information about the campaign. 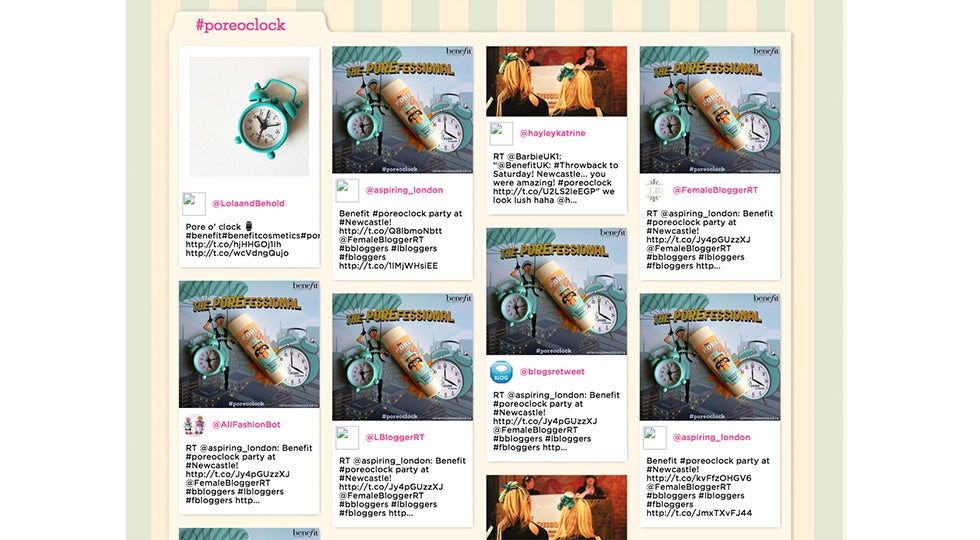 There was also a daily 4pm takeover of the Benefit Cosmetics UK website, where ‘Benefit Spy Gals’ would descend from the top of the screen and offer every visitor a code that could again be used to redeem a free sample.

People could also tweet to call the Benefit Spy Gals to their office by using the #poreoclock hashtag, and the ‘Gals’ would turn up with a range of POREfessional products.

Another brand wanting to get the most out of the 2014 FIFA World Cup was ITV.

The TV channel worked with Lexis to create the #goalface campaign, which aimed to capitalise on the frankly nauseating popularity of the selfie and its increased use in sport. 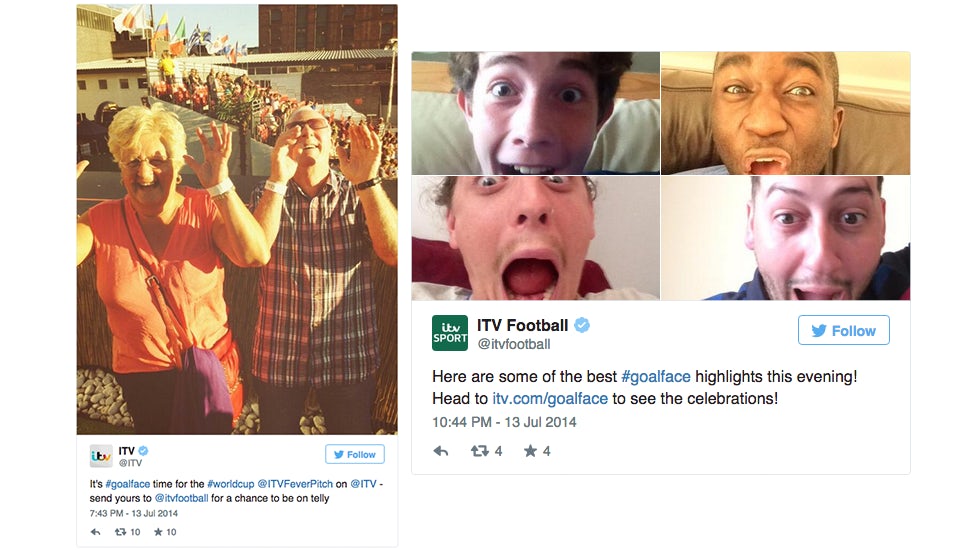 The best goal faces were published on a dedicated microsite and retweeted in real time by @ITV and @itvfootball. Fans could then browse through all the goal faces on the microsite and vote for their favourite.

Malibu worked with AnalogFolk London to make its brand relevant in time for the summer season by targeting YouTube viewers.

The theme was #BestSummerEver, and the cultural hook for the campaign was the rise of the summer bucket list.

Malibu created a platform called The Best Summer Ever Project and with the help of Malibu drinkers compiled a bucket list of things to do in summer, hence the hashtag #BestEverSummer.

The list included more than 200 experiences, from the relatively mundane ‘say hello to a stranger’ to the much more ambitious ‘organise a 100-person water fight’, and YouTube users were also encouraged to share their own ideas via the platform.

In addition to the platform, Malibu sent five strangers from around the world on a forty-day trip through Europe and the US. They were tasked with taking on the #BestSummerEver list and generate plenty of content for the campaign.

Dreamworks wanted to generate awareness for the release of its animated film Mr Peabody and Sherman. It partnered with Expedia Media Solutions to develop a digital marketing sweepstakes campaign.

The sweepstakes offered a free trip for two people to one of the destinations featured in the film, and used a combination of online ads and social marketing to encourage entries. 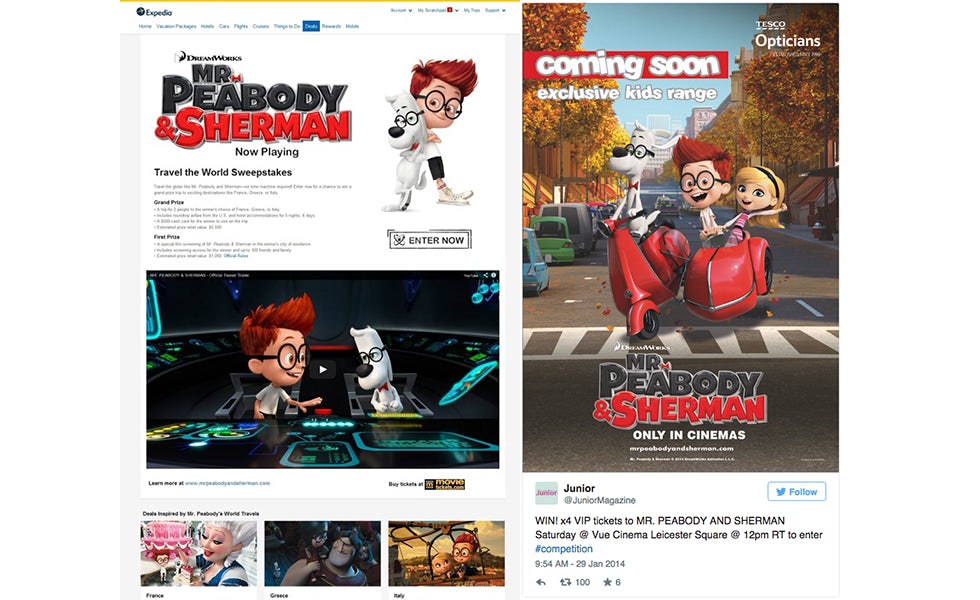 The campaign also included a destination theme store and microsite on Expedia featuring exclusive deals for the destinations in the film. 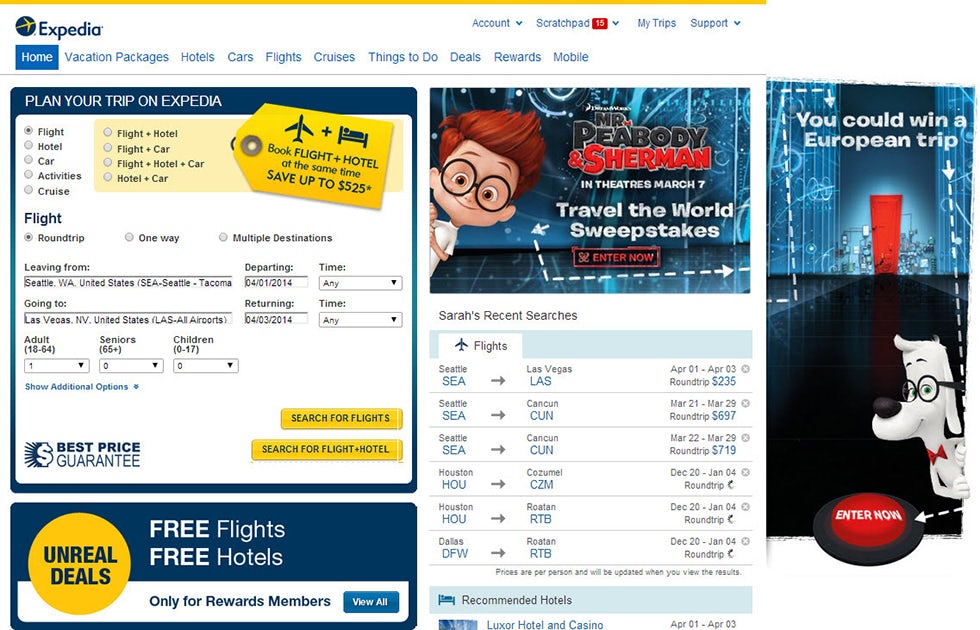 It also sparked Twitter conversations by asking ‘Where in history would you like to travel to?’ and an Expedia blogger interviewed Mr Peabody to put an authentic voice behind the campaign.

If you are responsible for a terrific social campaign, enter it into the Social Media category at The Masters of Marketing awards, brought to you by Marketing Week and Econsultancy (closing date September 23).

If you haven’t sent in your submissions for the Masters of Marketing awards yet don’t despair as the awards deadline has now been extended to 23 September, giving you an extra two weeks to enter. 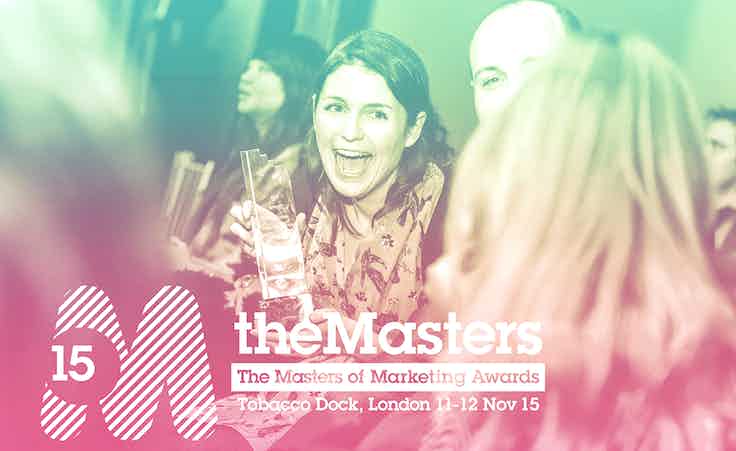 We are looking for your opinions on who has been the stand-out marketer in 2015 – an inspirational leader, capable of showing the power of marketing to the wider business community.