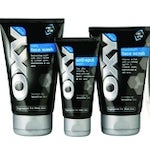 The brand, which is owned by Mentholatum, was relaunched as a male skincare brand in 2008 and now seeks to focus on encouraging teen boys to develop a skincare regime.

The ad shows a mother telling her teenage son that she has left her own Oxy products in the bathroom and that if he uses them his skin will clear up.

It aims to leverage the relationship between mums and teenage sons as mums are the main purchasers of medicated skincare products.

The camapaign follows an earlier ad campaign that highlighted Oxy’s repositioning as a male grooming product rather than a unisex product range.

Bernice Simpson, marketing director at The Mentholatum Company, says it is the first in a series of campaigns that will develop the “Oxy Family” concept.

The TV ad will launch in September along with a digital camapaign. Through the line and in-store activity will be added as the £1m campaign develops.

Rival medicated skincare brand Freederm is the sponsor of the final Channel 4 series of Big Brother.