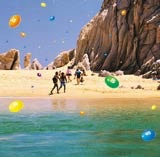 The Advertising Standards Authority (ASA) has dismissed complaints against a Skittles television ad showing a grandmother ripping open her blouse and flashing at her grandson.

The ASA received 41 complaints about the ad, created by TBWA/London, saying the ad is offensive to women and is ageist and degrading to the elderly. Viewers also complained that it could encourage disrespect towards older people.

But the ASA has ruled that the ad, which features no nudity, is “surreal and light-hearted”.

In another instance, 55 viewers complained against a City &amp; Guilds TV campaign showing a couple in bed listening to banging and groaning noises coming from their son’s bedroom next door. In the room is a young man with the imprints of two hands and a face shown wriggling under his skin. In the morning the boy looks into his mirror and a voiceover says: “You know the real you is in there somewhere – a City &amp; Guilds qualification can help you find the right job to bring it out.”

Complainants said the ad, created by Archibald Ingall Stretton, is visually shocking and can scare children. Eight viewers also felt that the ad alludes to a sexual act and this is unsuitable for daytime viewing or before the watershed. But the ASA has not upheld the complaints, considering the horror element to be “very mild”.

The ASA has meanwhile upheld complaints from listeners concerned about two radio ads featuring characters inhaling helium from balloons. A Travelocity.co.uk ad created by Miles Calcraft Briginshaw Duffy and another for Mastercard created by McCann Erickson UK have both been pulled. The Travelocity ad features Alan Whicker appearing to inhale helium then talking more quickly in a high-pitched voice. The Mastercard ad features a man singing over the telephone to his girlfriend in a high-pitched voice. The voiceover says: “A mobile top-up card and two helium balloons: &£17. Making your girlfriend laugh however far away she is: Priceless.”

The ASA says there is evidence to confirm the inhaling of helium gas is a “potentially dangerous practice”.

VideoIsland, one of the UK’s two largest online DVD rental companies, has bought smaller rival DVDs365, as consolidation in the sector accelerates. Last September, VideoIsland bought ScreenSelect.co.uk. The latest deal also includes DVDs365’s sister brands Mailbox Movies, Movietrak and QFlicks. However, the real significance of the move could be that Bill Dobbie, founder and managing […]

More than 120 of the world’s most luxurious and exclusive hotels and related travel brands have signed up for the launch of a new travel portal, Luxury Explorer (LE), which goes live on June 30 (www. luxuryexplorer.com). The site will offer a carefully selected collection of worldwide hotels, resorts and luxury travel experiences that have […]