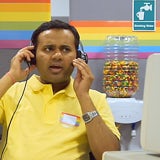 The candy brand has opened a “Rainbow Call Centre” manned by 15 staff who will “rainbowfy” fans’ status updates.

Skittles, which is owned by Mars, claims the stunt is a “Facebook first.”

The Facebook application allows users’ status updates to be made into “super mega updates” courtesy of Skittles.

Status feeds will be converted into a “weird and wacky” video clip that will then be posted on the user’s Facebook profile page.

The social media engagement campaign is running for the next two weeks after which fans can vote on their favourite video from the library.