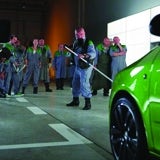 Škoda is launching a multi-million pound marketing campaign designed to expose the brand to a younger audience.

The 12-week campaign will centre around a TV ad that unveils the “meaner” side of the Fabia vRS. It introduces the new strapline: “Made of Meaner Stuff”.

The ad has been designed as a sequel to the “Made of Lovely Stuff” Cake campaign created by Fallon in 2008.

The TV campaign launches today (1 November) with the 30-second ad launching during cult show Takeshi’s Castle, while the 60-second version will go live on mainstream channels including ITV, Channel 4, Channel 5 and Sky.

The campaign will be supported by social media activity developed by archibald ingall stretton.

Škoda UK national communications manager Heidi Cartledges says: “This is one of our biggest campaigns ever in the UK, and designed to engage our brand with new audiences.

“The Made of Meaner Stuff advert, combined with our wider campaign activity, will see Škoda reaching a new audience – the younger, cult ’hot hatch’ demographic in addition to our mainstream and loyal customers.”

Social media activity will enable Facebook users to interact with the campaign by allowing their friends to vote on whether they are mean or lovely. Those who take part will stand to win a Fabia or Fabia vRS car.

Media buying and planning was handled by MediaCom.