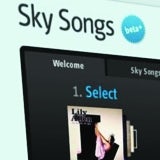 Sky Songs customers were told of the closure in an email sent last night. It says the service has not been able to “reach a large enough customer base.”

The music streaming service was set-up as a rival to Apple’s i-Tunes store but has been “unable to reach a large enough subscriber base” the media giant says.

Sky Songs launched last October as a subscription only package with the backing of all four major record labels, EMI, Universal, Sony and Warner.

Unlike many of its competitors, including Spotify, Sky Songs did not include a free option where customers could access free music packaged with advertising content.

The move comes after the media giant announced a renewed focus on driving traffic to its digital properties alongside a review of its agency roster.

A Sky spokesman said: “We’ve taken the difficult decision to close Sky Songs. Although we are extremely proud of the service we built and the experience it offers, we just didn’t see the consumer demand we’d hoped for.

“As Sky Songs demonstrates, we’re a business that takes risks and innovates, but at the same time, we’re pragmatic and act decisively when a new venture isn’t working out.”