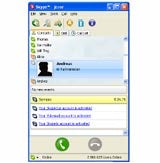 Skype, the company that pioneered voice over internet protocol (VOIP) services, has appointed Saul Klein as vice-president of marketing.

“Saul will centre his efforts on consistently delivering the Skype experience to our fast-growing user base, while continuing to build exciting new markets,” says ZennstrÃ¶m.

Klein, a founding partner of management advisory network the Accelerator Group, is a former group programme manager for Web platform services at Microsoft.

He also served as senior vice-president of brand and strategy at Firefly Network before its acquisition by Microsoft. Prior to that, he was director of digital communications at Ogilvy &amp; Mather Worldwide.

Klein stepped down as chief executive of Video Island in July and was replaced by former Dell director Simon Calver.

The duo invented a platform that allowed two users of its software to speak to each other free of charge using a broadband internet connection. Since then the technology has moved on to enable people to make calls to traditional landlines or mobile phones from their computers. Last week, Skype handed Albion a brief to boost its profile in the UK amid growing competition. Skype software has been downloaded 131 million times since its 2003 launch, and Microsoft, Google and BT have entered the market since.

Online bookmaker Blue Square has launched what it claims is the world’s first “person-to-person” cash quiz that allows players to compete with each other for money. The internet game, called Quiz Wizz, pits contestants against each other to win a prize pot. Blue Square says the concept not only opens up a new market in […]

News International’s (NI) foray into magazine publishing, announced last Friday, is not the first time the newspaper publisher has attempted such a move. Rupert Murdoch decided as far back as 1987, when he published youth-oriented Sky magazine as a joint venture with French publisher Hachette, that magazines have more global potential than newspapers. A separate […]

Faced with consumer apathy and an influx of low-cost tyres, Dunlop is to step up its marketing. But the brand lacks definition, says Barny Stokes For some, the name of Dunlop conjures up vague images of tennis racquets or its once-famous Green Flash sports shoes. In reality, the company sold off its sports and household […]