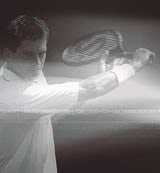 Sports brand Slazenger is reintroducing the “S” logo on its range of racquets, 25 years after it was scrapped in favour of the panther icon. The move forms part of an effort to make the brand more appealing to younger people.

The brand is also considering a contract with designer Wale Adeyemi, whose graffiti pattern clothes have been worn by David Beckham, to create a limited edition T-shirt range.

Parent company Dunlop Slazenger believes the “S” has remained synonymous with tennis despite being replaced so long ago. The panther could be dropped completely if the new logo is well-received by consumers.

The new-old logo will be seen at this year’s Wimbledon – this is the 101st year that Slazenger has sponsored the tournament. It has also sponsored Tim Henman for the past ten years.

Dunlop Slazenger also hopes to build on the Dunlop brand’s golfing heritage. It has redeveloped the Dunlop range following the sale of its higher-profile golf brand Maxfli to Adidas in December last year. In addition, it is to support the Golf Foundation, which promotes golf to children who wouldn’t normally have access to the equipment or courses.

Despite a recent vogue for Dunlop trainers, Dunlop Slazenger has been damaged by the rise of fashion-based sports clothing. The company was understood to be considering buyout offers in June last year.

UKTV has launched a campaign in the trade press inviting potential advertisers to take a closer look at the channel as an advertising medium. The campaign has been created by Karmarama.

FoxKalomaski has been appointed by the Star Alliance, the global airline partnership, to create a business-to business-campaign for the UK.

GlaxoSmithKline’s tobacco replacement brand NiQuitin CQ is to sponsor the BMW Williams Formula One team. The deal will be launched at this weekend’s San Marino Grand Prix.