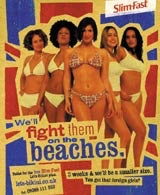 Diet brand Slim-Fast lost more than a few pounds when Unilever slashed its value last week to less than half what it paid for the company. The slimming brand has been blamed for a 26 per cent fall in Unilever’s profits, to &£543m for the second quarter of the year. In response, the Anglo-Dutch food company reduced Slim-Fast’s valuation by &£244m, just months after it slashed &£545m from its estimate of the brand’s worth. The US-based food range, which cost Unilever &£1.4bn in 2000, is now valued at just &£609m.

Slim-Fast’s slimming down comes during lean times in the dieting sector – in the US, diet food sales are down 25 per cent by value, while the company behind the Atkins phenomenon, Atkins Nutritionals, has filed for bankruptcy protection.

Observers say approaches to weight loss have changed since the furore over the Atkins diet, with dieters now concentrating on healthy eating and exercise, rather than “panacea” products and meal replacements.

Indeed, Unilever is reviewing the future of its Carb Options range, launched last September, because of a “decline in interest”.

Unilever has played down suggestions it will sell Slim-Fast and says that one of the reasons it decided to buy the brand was its track record of recovering market share in the traditionally “faddy” dieting market.

Yet Trevor Gorin, a Unilever spokesman, admits that Slim-Fast has not performed as the company had hoped, despite an ad spend of &£3.8m in the UK alone and adding products that take the range beyond the powders and shakes that the brand was built on.

He defends the &£1.4bn the company forked out in 2000, saying it was widely regarded as a good price at the time. Unilever’s decision to purchase Slim-Fast came after it identified concerns over obesity as a key factor in the food market.

Nick Cloke, a director of strategic marketing consultancy Catalyst, says Unilever believed Slim-Fast, which was already an established brand, could be developed to its benefit. “Unilever still saw it as a coming brand that it could reposition and piggy back on,” he says.

Gorin concurs with the views of many observers when he says Slim-Fast’s failure to respond to dietary fashions, in particular the low-carbohydrate phenomenon, cost it dear.

“Along came Atkins and low-carbohydrate diets and that’s when the trouble started,” he admits. “Slim-Fast has strong scientific support, and one of the issues about Atkins was that it was unscientific. The Slim-Fast people could not understand how something so unscientific could work,” he adds.

He says the brand did not respond quickly enough and only brought in revamped packaging and products at the end of last year. That was despite the fact that other Unilever brands, such as Hellmann’s, did take note and produced low-carbohydrate variants.

In terms of where the brand goes now, Gorin says Unilever will “fix the problem and then assess the situation,” but he refuses to be drawn on what steps will be taken to improve Slim-Fast’s fortunes, except to say that no job cuts are planned. The company has already been relocated from its Florida base to Unilever’s US headquarters in New Jersey.

Gorin admits that rebuilding sales can be difficult because of the seasonal nature of dieting. “There are different ways to promote this type of product but, because of the nature of the diet market, you have to win your consumers three times a year,” he says.

And now that consumers are growing suspicious of “quick fix” dieting products, Slim-Fast could has its work cut out re- establishing itself.

Marconi is in talks with its Chinese partner, Huawei Technologies, that could lead to a £600m Chinese takeover. The two companies signed a partnership deal in May for Marconi to market Huawei’s network technology in Europe.

Be, the new internet service provider which is launching 24Mbps broadband in the UK, has appointed Tania Hannaford as marketing director. She joins from McCann Erickson, where she worked on Nestlé, Capital One and Norwich Union.

Let the battle commence. The silly season has – for the third time in succession – taken on a deadly earnestness. Two years ago, it was the shark-fest around Cordiant’s moribund body; last year, Grey Global came under the hammer; this year, Aegis looks like the sacrificial victim. As the largest media buying and planning […]