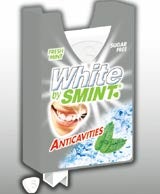 White by Smint will offer a natural alternative to consumers who do not like the whitening chewing gums that are already on the market. The product contains an enzyme called papain, which comes from papaya and, according to the company, has proven whitening properties.

The brand will receive marketing support, including television advertising, before the end of the year. The campaign will build on a Smint brand campaign that ran in Scotland in the first half of the year.

Chupa Chups is keen to develop White by Smint as part of the Smint brand, but to maintain an element of distinction from the core range because of its functional benefits. It has distinctive silver packaging to support this.

The teeth-whitening and functional chewing gum market has seen significant development in recent years. Wrigley has been particularly active, with the launch of Orbit Professional, which was launched as a teeth-cleaning range (MW August 7, 2003) and is now available in a teeth-whitening variant.

Confectionary giant NestlÃ© and oral care brand Colgate joined forces in 2003 to launch a major assault on the oral care market (MW June 19, 2003). Colgate already had a range of dental gums, which was relaunched with wider distribution as part of the deal.