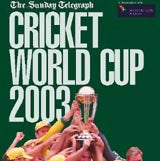 Ambush marketing, being a sneaky way to promote brands, does not often make the headlines. But it was thrust into the spotlight in February this year at the Cricket World Cup in South Africa.

In the minds of many observers, the competition’s organisers went too far to protect official sponsor Pepsi by throwing out a supporter whose “crime” was to quench his thirst with a can of Coca-Cola. Things got worse and the supporter, a South African businessman, accused the organisers of assault. Pepsi moved to distance itself from the incident, but the damage in terms of PR was already done.

It’s fairly safe to say that one man drinking Coke hardly constitutes hard-core ambush marketing, but the large amounts sponsors pay rights-holders means that the threat of a genuine ambush has to be taken seriously. One organisation doing just this is FIFA, the world’s governing body for football responsible for the FIFA World Cup.

Regula Bleuler is the marketing communications manager of FIFA Marketing, the body’s commercial arm. For last year’s competition her organisation brought in £300m worth of sponsorship from 15 companies, and for Bleuler their importance cannot be underestimated.

She says: “An event like the FIFA World Cup could never be staged in the same dimensions without the official partners. Without their support the success of the event would not be possible.” To protect these rights, says Bleuler, the first action to take is trademark registration.

Her organisation has also established a worldwide rights protection programme. This involves initiatives such as a global trademark registration programme and the appointment of legal experts. The internet, which offers marketers the chance to place timely sporting images on websites, and in doing so ambush by stealth, is also closely monitored.

“If another company just wants to profit without contributing anything to the event or the game of football as a whole, the FIFA World Cup marketing programme, the event and the co-operation in partnership are totally undermined,” she says.

European Sponsorship Consultants Association chairman Nigel Currie takes a more cynical view: “What irritates rights-holders is that companies like Nike are spending a fortune, but not with them.” He says the sporting landscape has changed dramatically in a way that has allowed the growth of planned and “accidental” ambush marketing.

“Perhaps the biggest change has been the explosion of different opportunities,” Currie says. “Fifteen to 20 years ago, you had perimeter boards and an event sponsor. We now have individual team sponsors, shirt sponsors, signs on the pitch and sponsorship for everything imaginable. It’s gone through the roof.”

Broadcast sponsorship can also muddy the waters. Early deals when the packages were first allowed led to an ambush of sorts. This has been addressed and now event sponsors are not only offered first refusal, but in some cases, such as ITV’s broadcast sponsorship of the Rugby World Cup later this year, stations guarantee that rivals to the event sponsors will not be considered for advertising, even if the official sponsors turned down the opportunity.

But all the planning in the world cannot prevent non-sponsors from sometimes getting the upper hand. Performance Research, a sponsorship evaluation company, found that following Euro 2000, many fans struggled to identify any of the tournament sponsors and were confused by the advertising campaign by non-sponsors such as Nike and Carling. These echo an NOP survey for Marketing Week on the 1998 FIFA World Cup, which found that out of 1,000 adults, only half were able to name at least one sponsor and two-thirds of the public wrongly attributed official status to brands.

Mark Knight, the international project manager of Performance Research says: “The most important thing for any official sponsor to keep in mind is that the average fan does not understand the differences between a title sponsor, associate sponsor or ambush marketer – nor do they care.”

Nevertheless, top sporting events rake in the cash from sponsorship. One company that has decided officialdom is the route is Mastercard, which last month became the biggest sponsor of football events in the world. The company will sponsor five global properties, including the the 2004 UEFA European Football Championship in Portugal and the 2006 FIFA World Cup in Germany. Arjen Kruger the chief marketing officer for Europe says going down the official route is what suits the brand.

The Mastercards of the world could be helped immeasurably if countries were to follow the South African government’s approach to ambush marketing. After pressure from the organisers of the Cricket World Cup, the government introduced legislation banning ambush marketing before and during the tournament.

Nick Johnson, a partner at law firm Osborne Clarke, thinks this is a step too far. He says that “cheeky” marketing ideas such as indirect references to events, handing out flags to spectators and calling the brand the unofficial product of the event would be outlawed. “The use of criminal sanctions for what is in reality a matter of commercial competition is quite simply not appropriate. There is nothing inherently dishonest about wanting to build a campaign for your brand around a sporting event,” he says.

But until other countries adopt these laws, the battle between official sponsors and ambushers can be won by the most creative and imaginative marketers.

The objectives were to increase brand awareness, build key brand attributes of fun, enjoyment and modernity and to test sponsorship as a mass communication tool. Sponsorship became the heart of the marketing campaign and was exploited well beyond the event itself. Awareness of Imperial Leather as a sponsor of the games was 33 per cent nationally and 48 per cent in Manchester – 59 per cent higher than the next-best sponsor.

Despite recent economic uncertainty, the Hollis Sponsorship Awards attracted more entries than ever before, demonstrating the resilience of the sponsorship sector and how important the awards have become as a showcase of the industry’s achievements. Nominations range from the top-billing football sponsorships to a sampling exercise on a beach in Dorset. The Hollis Sponsorship Awards judges were looking for evidence of the ‘big idea’, for innovation, for appropriateness and synergy, for creative and maximised exploitation and proof on paper that the campaign had met its business objectives.

Charity &amp; Community Sponsorship – supported by the Institute of Fundraising

A Taste of Spain microsite, sponsored by San Miguel – entered by Guardian Unlimited

Nominated: European Sponsorship of Formula One, sponsored by Canon – entered by The Works London

Best Use of Research – sponsored by Ipsos, Marketlink Research and Sports Marketing Surveys