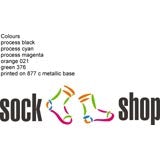 Sock Shop is launching a redesigned London store and rolling out a range of branded products to complement its existing lines.

The flagship store in Covent Garden is to trial brands such as DKNY, Calvin Klein, Falke hosiery, as well as accessory ranges from Hello Kitty and Bang on the Door. It will also stock the Playtex Wonderbra range.

Sock Shop marketing manager Susan Jones says the chain previously sold only Burlington’s socks alongside its own ranges, but has decided to extend the branded ranges.

The branded goods will be rolled out to 12 stores in September as part of a six-month trial. If the trial is successful the brands will be introduced to another 64 UK stores.

The Covent Garden shop will also feature Sock Shop’s new logo and interior design, which will be tested at several stores due for refits in the coming months.

Besides the UK stores, the chain has 34 franchise stores abroad. Jones says that the franchises are keen to see the new look in their stores.

The logo was designed in-house. The chain does not work with any ad agencies and Jones says it will look at developing its database to target customers.