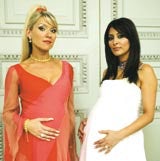 The mockumentary will run on ITV2 from March 31, straight after the episode of Footballers’ Wives ends on ITV1. Once the main series finishes on ITV1 later this year, ITV2 will begin to show the spin-off drama, which will focus on the nocturnal antics of the players and their partners.

The deal, thought to be worth more than &£500,000, was negotiated on behalf of the client by Kevin Hurdwell at Acumen Partners. He says: “Footballers’ Wives and Soft Lips are a perfectly matched brand and programme proposition, together keeping millions of young women satisfied.” The fourth series of Footballers’ Wives had an average audience of 6.7 million, peaking at 7.3 million. Bliss, the premium packaged wine-based drink manufactured by Scottish Courage, sponsored the last series.