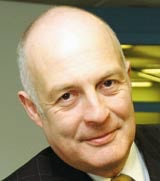 It is thought that McComas does not have a job to go to and the company is not seeking a replacement. Instead, her job has been split, with responsibility for brand marketing for both Somerfield and Kwik Save passing to Ed Owen, previously head of the upmarket Somerfield Market Fresh stores.

A former McVitie’s marketing director, McComas joined Somerfield in 2002 (MW September 26, 2002) as brand director for Kwik Save. She introduced an own-brand food range and launched a &£7m advertising campaign through Miles Calcraft Briginshaw Duffy, using the strapline “Now that’s what I call a Kwik Save”, before being promoted to group marketing director last year. M&C Saatchi handles the Somerfield advertising account.

Last month, Somerfield, which operates more than 1,200 stores, dismissed a &£1bn takeover bid from Baugur and struck a deal with Texaco to take over more than 140 petrol stations. In January, the retailer reported a rise in interim pre-exceptional operating profits – from &£17.2m to &£32.7m – for the 28 weeks to November 6, 2004.