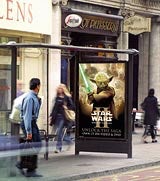 Twentieth Century Fox Home Entertainment is backing the launch of its new Star Wars movie on video and DVD using sonic posters on JCDecaux bus shelters. The 15 sonic shelters will form part of a campaign for the launch of ‘Attack of the Clones’ and will run across the UK. The shelters will play the soundtrack from the movie, with soundbites of music and dialogue from the film, including the notorious sound of Darth Vader’s breathing. Each recording lasts for three minutes, with a five-minute delay between transmissions and will run for 12 hours a day from 7.30am. The campaign, which will run for two weeks, was planned by MediaVest through outdoor specialist Poster Publicity. Creative work is by Lucasfilm.