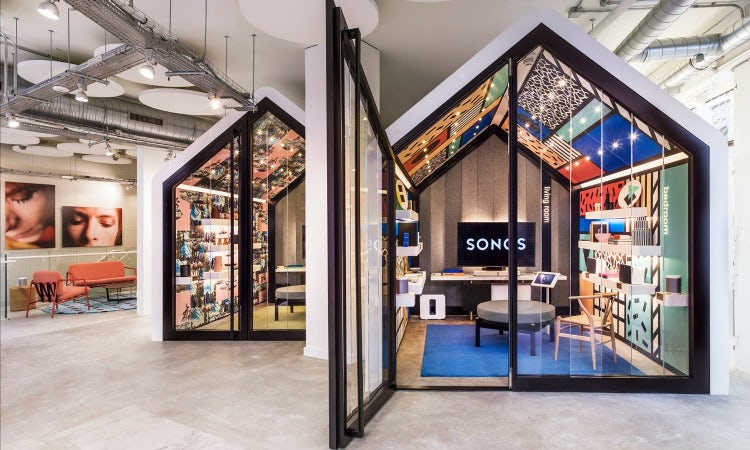 Sonos is opening its first concept store in London today (16 November) as it looks to widen its appeal and convince more shoppers they should consider buying one of its home sound systems.

The store, located in Seven Dials near Covent Garden, features two ‘Listening Rooms’ – acoustically-tuned, house-shaped structures designed to replicate the multi-room listening experience Sonos sells. Guests will be able to stream their own music into the rooms while at the same time testing out the speakers and system.

The store also has an event space downstairs that will play host to an ongoing series of screenings, cultural talks and installations. The first, currently on display, celebrates David Bowie with a series of rarely seen images of the singer’s London life. And tomorrow (17 November), the store will honour his work through the stories of artists and fans, including musicians Graham Coxon, Carl Barat and Goldie.

The London store is Sonos’s second following the opening of a space in New York in July last year. While Sonos has wide retail distribution, selling in retailers including John Lewis, Amazon and Currys/PC World, the brand has realised recently that it needs its own space to promote the brand experience and widen its customer base.

Speaking to Marketing Week at a press event prior to the opening, Whitney Walker, Sonos Stores general manager, explains: “Up until the time we built the Sonos store the best place to discover Sonos was at a friend’s house. We have tried to recreate that sense of discovery in a retail environment.

“Advocacy is an awesome tool but at the same time if it’s your best tool you’ve got to tailor your business model to it. Because our business is speakers it means everyone has to stop by a friend’s house. That is hard to control or scale.”

Sonos has taken cues from the likes of Apple when thinking about what a store should be like. It has a sleek, minimal style, while all staff have been on a month-long training programme to ensure a retail experience focused on customer service not sales.

Omar Gurnah, global retail marketing director, says key to the success of the stores is not sales but experience. Sonos sees NPS as the most important metric, both for the store and staff – how many people leave the store and are then likely to recommend Sonos to friends and family. The US store has a NPS score in the 90s, according to Walker.

“That is what is pretty unique about the way we view this store. It is a marketing investment for us. It is about putting the experience in front of people in their own environment for the first time. If they end up buying from Amazon, John Lewis or Currys, absolutely great,” says Gurnah.

“We would rather they buy here but we won’t measure the success of this space by how many speakers it sells. It’ll be the number of people that come in, get a great experience and think they should add a Sonos to their home. Which when it comes to retail is a very different way of measuring retail. Even for us it’s a new skill.”

While the store won’t be measured on direct sales, Sonos is of course hoping to increase sales. Walker says the five-mile radius around the New York store is seeing its fastest sales growth in the US and Sonos would hope to see a similar result here. The aim is also to bring down the amount of time it takes for people to go from thinking about buying a home sound system to actually buying one, which currently sits at 6.6 months.

This store is a marketing investment for us. It is about putting the experience in front of people in their own environment for the first time.

The plan is to have three stores, with the third set to open in Berlin, Germany early next year. And so while retail is a big investment for Sonos, it remains a small part of how it reaches customers. Raising awareness of the brand through marketing remains key.

Here, the brand also takes rather a different approach to most tech brands. While the majority focus on product features, Sonos prefers to talk about the brand experience to build awareness.

“Our main thing is rather than talk to people about the tech benefits we want to show them the difference it can make in their homes,” says Gurnah. “We have a story there that most people can relate to, so we would focus on showing people that when they have access to music it changes how they live at home. Once they have got that, then we explain what the product does.

“Standing in a John Lewis being shown the system is the easy part. Some 91% of people that buy a Sonos have done detailed research online so when they’re in store it’s because they’re excited. The difficult part is inspiring people about a different way of listening.”

Sonos is also different in the way it approaches working with partners. Owners can listen to any music service on the device, from Spotify to Amazon to TuneIn Radio. And the latest version of the speaker includes Amazon’s Alexa voice assistant, with plans for integration with Google next year.

“A lot of brands would see Amazon as a competitor but we have a slightly different approach,” says Gurnah. “We want people to be able to play music as quickly and easily as they possibly can. [The first way to do that was with] remote controls and buttons, then apps and next, we think, voice. We’re going all in on voice as a way of getting to music faster.” 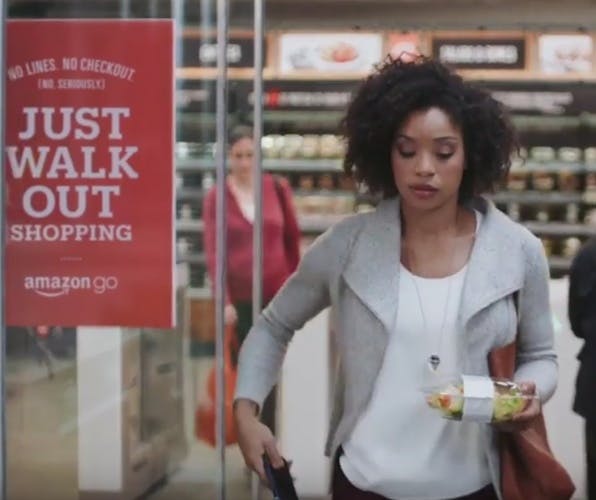 The ecommerce giant wants to end shopping queues completely with its latest trial. 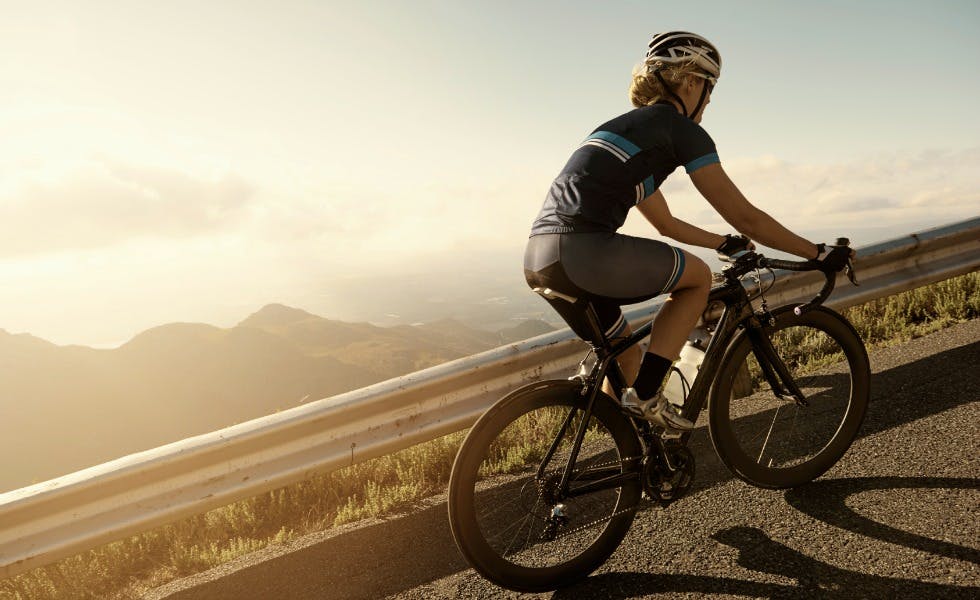 Performance Bicycle is the biggest speciality bike retailer in the US with more than 100 stores across 20 states. Yet it is looking to shake up the market with a new store concept that puts the service department front and centre of the shopping and brand experience.