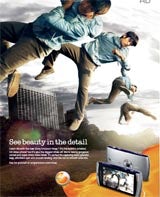 The campaign includes a TV campaign, created by Saatchi & Saatchi, that will air tomorrow (12 March) during Ant & Dec’s Push the Button programme on ITV1. The ad, which will see users filming dancing with the handset’s HD technology will also feature a new strapline, “See beauty in the detail.”

Online banners, print and outdoor ads will back the TV ad. Iris has handled print and outdoor creatives and Dare Digital has worked on the digital campaign, which will also feature a site for users to post their HD videos.

MEC has handled media planning and buying for the campaign.

Sony Ericsson’s senior marketing manager, Richard Dorman, says: “We’ve historically been known as a good company for music and photography. So we want to play up the HD features of this handset very heavily in everything we do for this campaign, emphasising the beauty you can get using the Vivaz smartphone.”

The handset will also feature in advertorials in selected Bauer Media and Factory Media titles. In-store activity will attempt to demonstrate the clarity of the HD images are.

Vivaz’s launch follows the Satio and Atio earlier this year, which featured space hoppers in its ads.

Sony Ericsson is dropping its title sponsorship of the Women’s Tennis Association tour after the two agreed a new two-year extension to their partnership.

Rivals Nokia have opted to promote its newest smartphone the X6 16GB under the tagline “Come Get Entertained”.