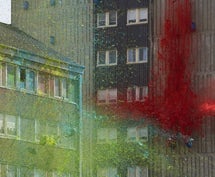 Sony has exploded 70,000 litres of paint onto a disused Glasgow tower block for its new Bravia ad, promoting the brand’s range of high-definition LCD televisions.

Controlled firework explosions were used to blast the multi-coloured paint into the air, and all over the building, to emphasise the brand’s ethos of achieving “colour like no other”.

The ad is the much-anticipated follow-up to last year’s successful “Balls” ad and, like its predecessor, has already proved popular among the online community. Images taken by members of the crew are available to view at websites such as Youtube.com and Flickr.com.

The “Paint” execution took 12 days and 300 people to film and used enough paint to cover the Big Ben clock and tower 609 times.

The ad will air for the first time in the UK on October 17, on ITV1 at 8.35pm, during the Manchester United vs FC Copenhagen Champions League fixture.