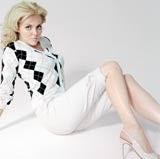 British Supermodel Sophie Dahl is the face of the knitwear brand Pringle of Scotland’s spring/summer 2003 women’s collection. The campaign, which has been shot by photographer Jonathan Bookalill, sees Dahl posing in the style of a Fifties’ pin-up girl, but dressed in modern Pringle clothing. The theme draws on Pringle’s history as a brand popular with Fifties’ pin-up sweater girls such as Margaret Lockwood. A campaign for Pringle’s first menswear collection, which was launched in Milan last week, has also been shot and features Swedish male model Oskar. Both campaigns have been created in house by Pringle’s creative consultant Valerie Wix, and media buying is through Zenith Media. The campaign will break in the press, on taxis and in store during March.