Sorrell, who made the comments in an interview with the Wall Street Journal, said digital budgets would increase in the next few years but wouldn’t bridge the disconnect between share of spend and share of time spent online.

“Companies are spending up to 13% on digital. We know we spend up to 20% of our time online, so in theory spending should be up at 20%,” he said. “It’s just natural conservatism, resistance to change and inability to adapt to change. I believe when digital budgets get to 20%, which will be in four or five years, we’ll be spending 30% of our time online.”

Sorrell also said Google was becoming a friendlier “frenemy” as it worked more closely with the WPP Group.

“Google is focusing more on its mobile search and classical search business,” he said. “We have partnerships with Google and are working with it in many areas. We’re still its biggest purchaser of search ads. We spend $850m-900m annually with Google.”

The WPP chief admitted the group had been too optimistic about the recession and didn’t move fast enough to prepare for the economic downturn.

“We could have moved more quickly,” he said. “We budgeted this year’s revenues to be down 2% for the year. In the initial stages of the budget, we thought they would be up 2%. We took it down to zero and then to -2%. For the first half, we budgeted -4% and it came out at -8%. So clearly we were too optimistic.” 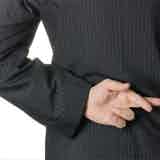 Brands that put customer services at the heart of their strategy lead the way in the latest Promise Index research, which measures whether a consumer’s experience exceeds their expectations.