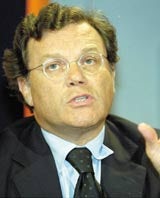 WPP chief executive Sir Martin Sorrell has embarked on an acquisitions drive in the internal communications sector, in the belief that it is the next big growth area for marketing services.

WPP has acquired the Marketing &amp; Communications Agency (MCA) for an undisclosed sum, and is bolting the agency on to its existing internal communications consultancy, Banner McBride, in an effort to build a global presence in the area.

MCA, founded in 1992, has revenues of &£9m and offices in London, New York and Stockholm. Its clients include British Airways, Shell Chemicals, NTL, Dell, Barclaycard, Sony, KPMG and Oracle.

“We regard internal communications as one of the key opportunities facing our clients,” says Sorrell.

The two companies will be integrated over a three-month period and relaunched under a new name in September. WPP claims that redundancies are unlikely. MCA chairman Kevin Thomson will become president of the new company, and MCA group managing director Kathy Whitwell will be chief executive. It is not known what post will be offered to Banner McBride chief executive Mike Pounsford. The combined company will have about 120 staff.

According to a study conducted by Thomas Harris/Impulse Research, the Fortune Top 200 “most admired” companies spend an average of $1.6m (&£1.1m) each on internal communications. This, says the study, accounts for the majority of their total corporate communication budget.