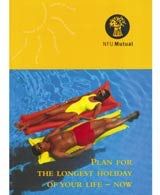 Soul has won the &£2.9m NFU Mutual account, after a shoot-out against incumbent agency Cogent and Miles Calcraft Briginshaw Duffy.

It is understood that there are plans to increase ad spend to about &£12m as the mutual – the UK’s ninth-biggest insurer – tries to win new customers outside its core farming audience.

NFU Mutual was founded 90 years ago, as part of the National Farmers Union. Unlike other mutuals, including leading building societies and insurers, its management has refused to consider turning it into a public company. All policy holders are required to agree to donate any “windfall profits” to an NFU charity, should demutualisation occur.

It is understood that the mutual wants to change its strategy to also appeal to affluent individuals with second homes in the country and those with a general interest in rural life. NFU Mutual’s marketers have acknowledged that outside its core farming audience, where brand recognition is almost total, it is little-known.

Soul is also tipped to be about to pick up a campaign for the Greater London Authority, aimed at getting more recruits for the Metropolitan Police. It is understood the business is worth between &£1m and &£2m.

It is fascinating that in one issue (MW September 19) you encompass both the biggest problem, and the greatest missed opportunity in fmcg (packaged goods) marketing. The articles “Not All Brands Bite” and “Missing the point?” both cite the impossibility of judging return from spend in two entirely different areas. “Not All Brands Bite” ended […]

TXU Energi is being forced to take out radio and press ads to reassure its customers that they will continue to be supplied with energy following an announcement that its US-based parent company TXU is cutting off cash supply to its UK and European subsidiaries. Energy watchdog EnergyWatch is also launching a consumer information campaign […]

It is fascinating that in one issue (MW September 19) you encompass both the biggest problem, and the greatest missed opportunity in fmcg (packaged goods) marketing. The articles “Not All Brands Bite” and “Missing the point?” both cite the impossibility of judging return from spend in two entirely different areas. “Not All Brands Bite” ended […]