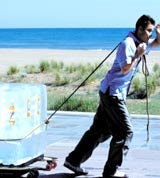 Coca-Cola Great Britain has appointed Soul to handle the Fanta account, worth more than &£3m in the UK.

The agency was first used by the company to create a UK campaign for Coke Auction, the website that allows consumers to bid for goods using can ring-pulls that they have collected.

It is understood that Soul pitched for Fanta against Lowe Lintas and Leagas Delaney, which has previously worked on the brand.

Fanta is one of Coca-Cola’s highest priority brands in Great Britain. The company claims that since the relaunch of Fanta in 1997 it has grown an average of 25 per cent every year. Research by Canadean 2000 shows that by volume the brand is the number one carbonated orange drink in the country.

Charlotte Oades, marketing director for Coca-Cola Great Britain and Ireland, says: “Soul is a promising new agency and one with whom we hope to do great work. We have an unprecedented opportunity to sustain Fanta’s growth by developing local communications with Soul in 2001.

“This is the latest in a series of agency appointments in the UK related to the Coca-Cola Company’s ‘Think local, act local’ strategy.”

Mother, which handles Lilt, has picked up the &£5m Dr Pepper account (MW November 23) and Wieden &amp; Kennedy has been re-appointed to the &£7m Diet Coke account. Coca-Cola GB also stripped Universal McCann of the media planning and the &£7m non-TV buying across its portfolio , handing them to BBJ. Universal retained the &£25m TV-buying business (MW November 16).